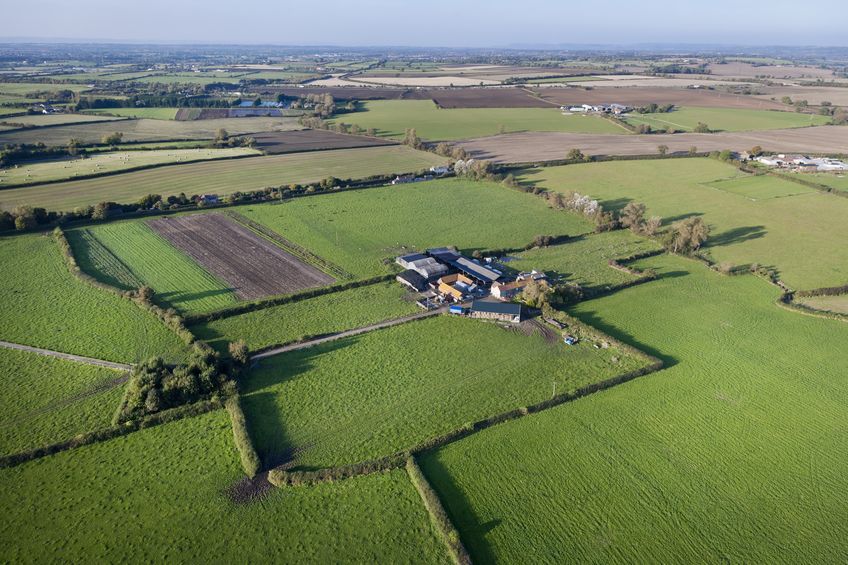 The market is expected to maintain stability throughout the remainder of 2021 despite the uncertainty surrounding the agricultural sector, according to the UK’s leading land and property agents.

The arrival of post-Brexit policy reforms and uncertainty over the UK-EU trade deal meant that, even before Covid-19 restrictions, 2020 was always set to be an extraordinary year for farming.

However, despite farmland supplies hitting record lows in the past 12 months, the market has stayed remarkably resilient.

The average price of arable land ending last year was exactly the same as the five-year average, at £9,300/acre, according to land agents Strutt and Parker.

Data from the firm also shows that the volume of farmland being brought to the market shrunk considerably, with just under 54,000 acres being marketed publicly last year.

That is 15,000 acres less than in 2019, which was already one of the lowest years on record. This has helped values to stay firm.

Andrew Fallows, Head of Rural Agency at Carter Jonas said: “The farmland market has been in slim supply for the past two years, which can be attributed to greater uncertainty over the future of agriculture, both in a political and economic sense.”

On top of the existing uncertainty within the industry, the first Covid-19 lockdown resulted in a sharp drop in the number of new releases as sellers held back on making decisions.

With the property market allowed to continue functioning throughout lockdown, the market bounced back impressively during the summer period.

However, this was not sufficient to fully recover from the 43% fall in farms and estates for sale during that second quarter.

There was considerable disparity in supply regionally, with prices varying heavily dependent on location.

Strutt and Parker said that in three regions of the UK - Yorkshire and Humber, East Midlands and West Midlands - the supply of land was a remarkable 40% lower than the five-year average.

Demand stayed robust throughout 2020 despite the difficulties that the year brought. 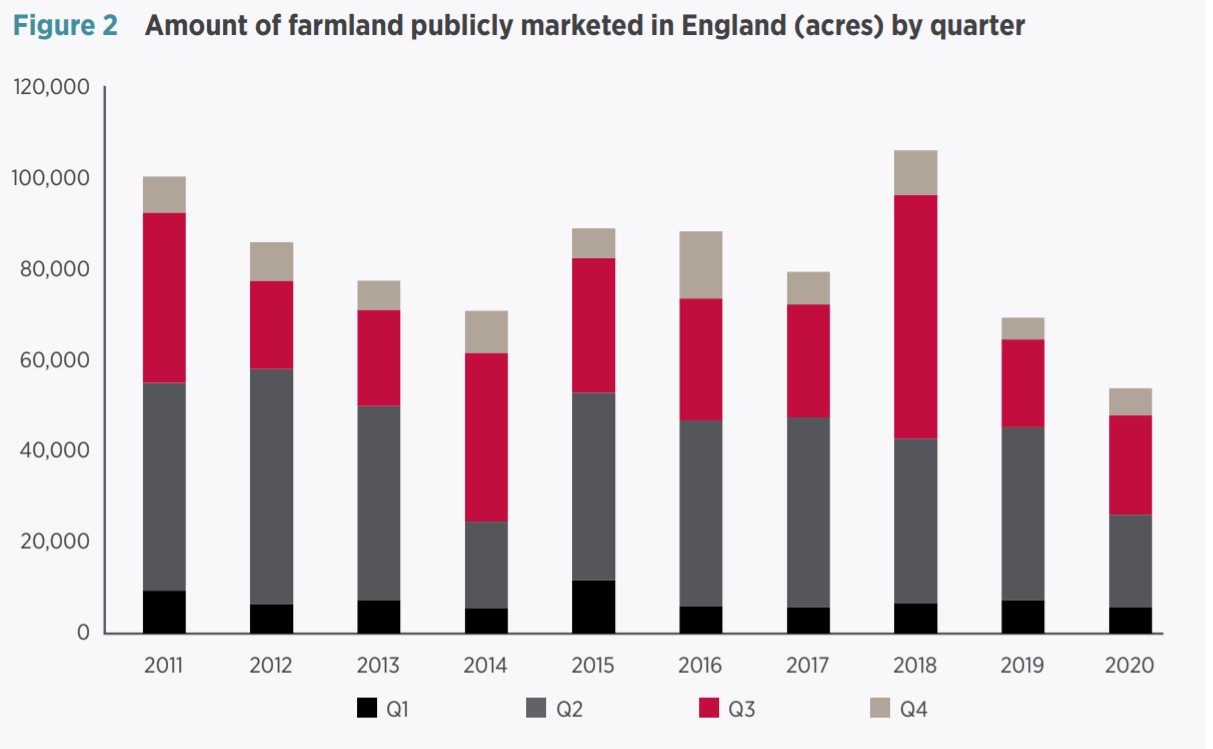 There was a significant rise in the number of farms that sold for or above their guide price which, whilst reflecting the sharp fall in farmland supply, proves that motivated buyers remain in the market.

The uncertainty regarding a Brexit trade deal dragged on until Christmas Eve when an agreement was finally reached, land agents believe that this will have steadied the nerves of some uncertain buyers who had held off throughout 2020.

Interest in amenity farms and country houses was particularly high after the end of the first national lockdown, with many people looking to move away from urban areas.

This period saw the busiest housing market in decades and resulted in non-farmers making up a higher than usual 34% of deals, according to data from Savills.

“With improved connectivity, fewer commuting to cities, and the desire for outdoor space, some buyers are casting their nets further than ever before to find lifestyle properties that balance work and family life.”

Small lots therefore remained attractive due to their affordability, however large parcels of land over 500 acres proved the most likely to sell in 2020.

Farmland is seen as safe long-term investment despite short-term volatility, meaning that rollover buyers and farmers are still active in the market. 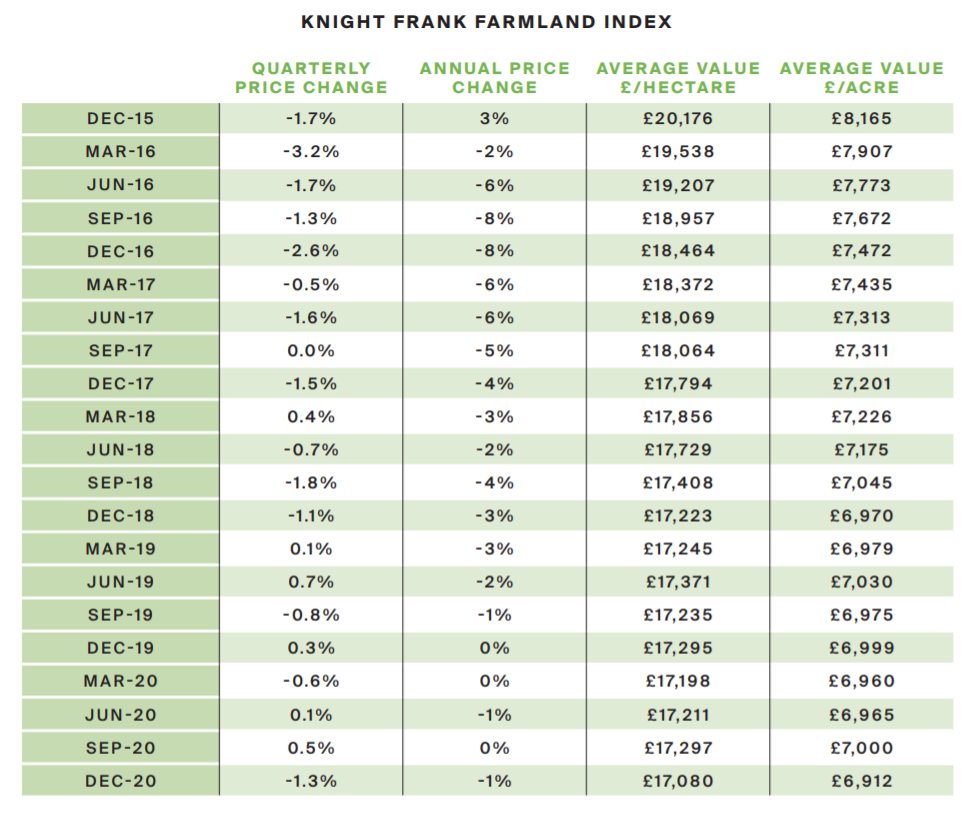 For farmers a neighbouring block of land is a rare opportunity to expand.

Strutt and Parker said that livestock farms, both lowland and hill, have proven the least likely to sell, which is reflected in the highest proportion of unsold farms being in Yorkshire and the Midlands.

On the other hand, strong prices in excess of £10,000/acre have been achieved in some areas, which would suggest that the flush of lifestyle buyers coming into the market has made location an even more critical factor.

2021 will witness the beginning of the UK’s 7 year agricultural transition period during which the industry will shift from BPS payments to the new Environmental Land Management Scheme.

However, exactly how that scheme will function is yet to become entirely clear.

Andrew Fallows said: “While farmers and estate owners still lack key details on the future of environmental support, the direction of travel has at least become somewhat clearer.

"With the government’s Roadmap to Sustainable Farming published, land owners can begin to plan and adapt to find opportunities and react to challenges.”

The impact that BPS cuts will have on the market is not yet apparent: the reduction in cashflow is unlikely to hit home until at least 2022.

Meanwhile, the removal of the guaranteed income from subsidy relief is likely to make the industry less attractive to buyers.

However, the shift to an environmentally focused policy could open up new opportunities, with marginal land suitable for tree planting already in growing demand.

In Scotland uncertainty also reigns over policy, where the decision has been made to retain BPS until at least 2024, however there is little detail of what will happen beyond that date.

How tax is affected in the Chancellor’s drive to fund the UK economy’s pandemic recovery could prove pivotal for the market.

Although the latest budget in March left Capital Gains Tax untouched, any future increase or additional wealth tax could influence the amount of non-farming money available to buy land.

Mr Fallows suggested that: “Buyers and sellers can currently benefit from a relatively benign tax regime, which will encourage activity in the market.

"However, in the longer term it is unlikely that Inheritance Tax and Capital Gains Tax will remain untouched as the government looks to re-build the economy.”

The wheat price is currently over £200/tonne for the first time in a decade, and with cereal prices forecast to strengthen, this could translate into the land market. 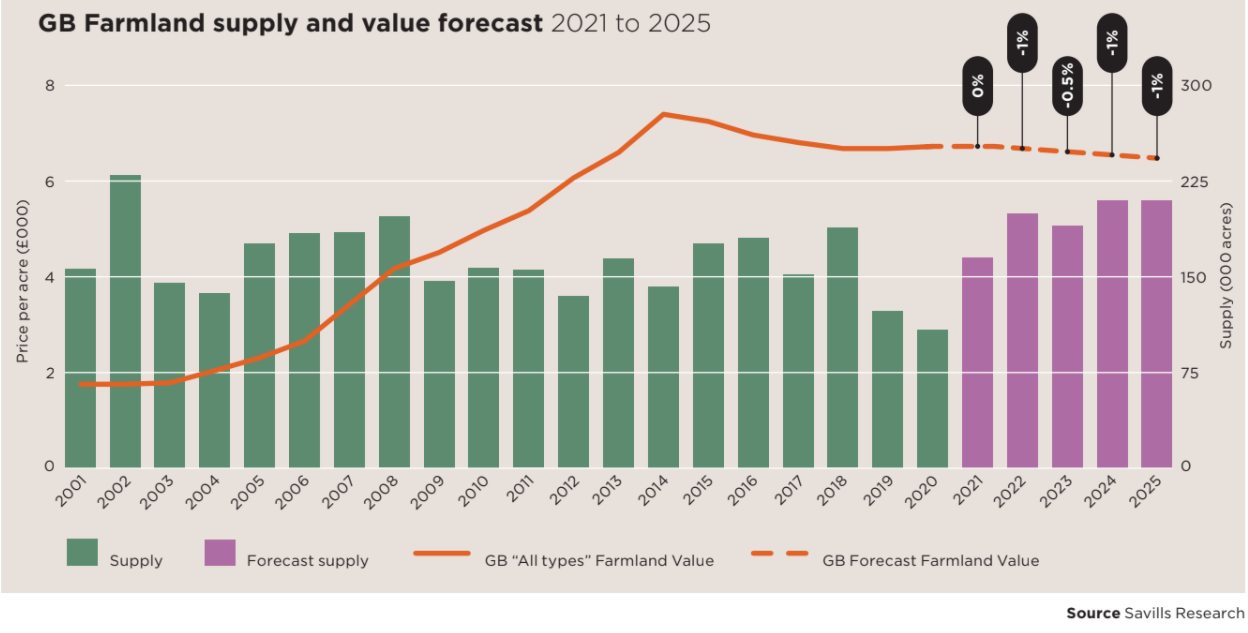 The agreement of a Brexit trade deal also means farmgate prices are less likely to be affected by the UK’s withdrawal from the EU.

Traditionally, certainty within the industry increases levels of supply, however many unknowns still remain, so it is likely that market activity will remain reduced as both buyers and sellers seek clarity before making major decisions.

Supply is therefore expected to stay tight this year, however over time Savills forecast supply to recover to levels largely in line with the ten-year average that predated the Brexit vote.

They suggest that in the short-term there will be some volatility due to subsidy reform and changes to trade, and that a wide range of prices either side of the average markers should be expected.

In the long-term, Savills believe that the sector will strengthen and that the market’s history as a safe and secure investment, particularly in times of economic uncertainty, will continue.