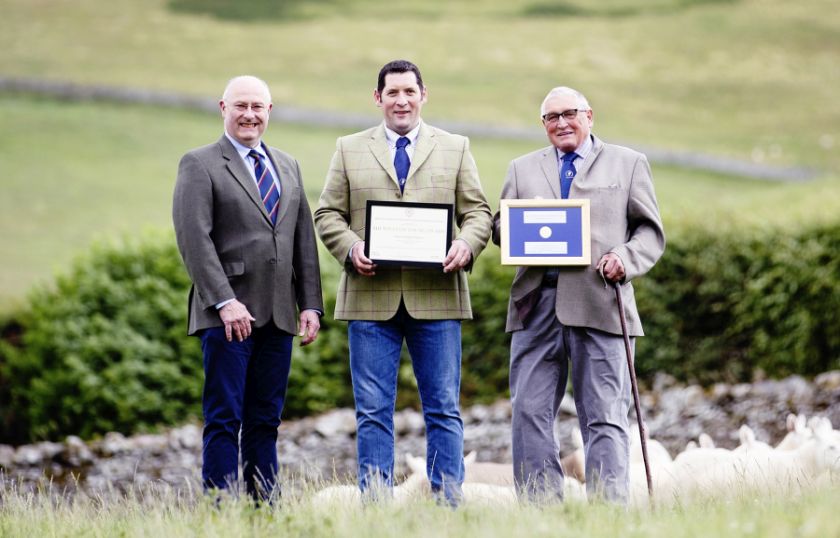 The winners this year are father and son duo Jimmy and Willie Thomson, from Hownam Grange in Kelso

A father and son team from the Scottish Borders have been awarded this year’s prestigious Sir William Young Award for their contribution to sheep breeding.

The award, by the Royal Highland and Agricultural Society of Scotland (RHASS), recognises outstanding contribution to livestock breeding.

It also commemorates the service to the Scottish agriculture industry by the late Sir William Young.

Father Jimmy and son Willie Thomson are based at Hownam Grange, a 1650-acre hill farm on the Roxburghe Estate, Kelso, which they have tenanted since 1941.

The pair have been at the top of North Country Cheviot breed for many years now.

Willie lives at Hownam Grange with wife and farming partner Laura and their three children, while Jimmy runs another tenanted farm at Kelsocleugh in Yetholm in partnership with wife Peggy.

They also have a herd of 80 Blue Grey suckler cows, which are bulled with an Aberdeen Angus bull and the calves sold as stores or as breeding heifers.

They have shown Cheviots as far back as the 1950’s, but only started at the Royal Highland Show after Jimmy judged at the 150th Highland Show.

While they also have shown Galloway cattle, Scotch Halfbred sheep and commercial sheep, it is their North Country Cheviots they are renowned for.

Flocks from both farms have picked up championship rosettes up and down the United Kingdom.

Jimmy and Willie’s sustained attention to the finer points of both the Park and Hill types of the North Country Cheviot breed has seen take the overall Champion at the Royal Highland Show on numerous occasions.

They have also won the Interbreed championship four times, the reserve three times, and the Queen’s Cup in 2010.

Alongside this, they have also sponsored the sheep interbreed pairs competition at the Show for three years and been awarded the John Miller Trophy, Fife and Kinross Gold Cup.

Last year the pair sold one ewe lamb for £4500, a new breed record for a female, and during the September tup sales at Lockerbie both sale days were topped with Hownam Grange tups selling at £6000 each.

Their breeding knowledge is reflected in the number of prestigious positions held, with Jimmy a past chair of NSA Scotland and Honorary President of NCC Society, while Willie is the current past President of the NCC Society.

Willie Thomson said it was a 'real honour' to be recognised with such a prestigious award for breeding livestock.

"There have been some amazing livestock producers who have won the award in the past and to be in that company is overwhelming,” he said.

Although facing the challenge of a sale season impacted by Covid-19, in the long term their plans are to create a future-proofed business structure for the next generation.