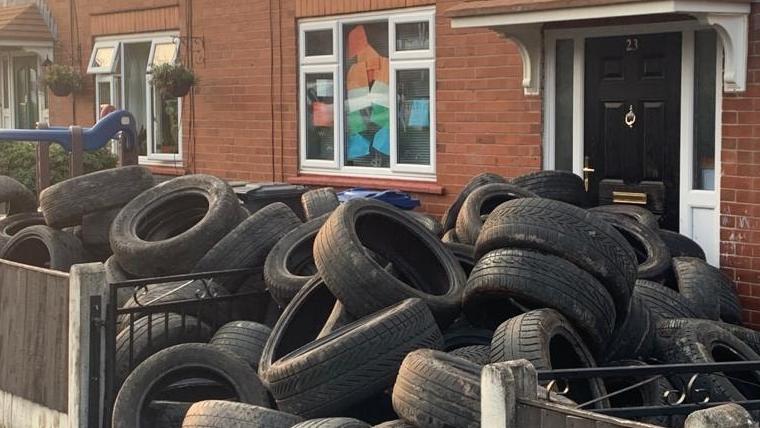 Over 400 tyres were handed back to the culprit after a three day deadline to pick up the waste passed (Photo: Stuart Baldwin/Facebook)

A fed up farmer has taken revenge on a fly-tipper who dumped hundreds of tyres on his farm in Merseyside.

Stuart Baldwin, who farms in Haydock, near Wigan, found 471 tyres dumped on his land on Tuesday 11 August.

CCTV footage allowed Mr Baldwin to track down the alleged culprit as it showed a man tipping tyres out of a van.

The 56-year-old farmer gave the fly-tipper three days to clean up the mess, hoping the incident would be resolved.

But when the deadline passed and nothing had been done, Mr Baldwin loaded the tyres into a lorry and handed them back.

A clip posted by the Twitter page We Hate Fly-Tipping, which has gained over 5,000 retweets, shows the tyres being tipped back onto the pavement outside a house.

This farmer is our Hero of the Week. Someone fly-tipped dozens of tyres on his land - so he delivered them back to the fly-tipper. ?????? Please Follow and Retweet and download our free app to report fly-tipping anywhere in the country. pic.twitter.com/QjjOx4gvr7

“I got sick of it so I thought I would do a bit back. I just thought ‘I’ve had enough of this’. Fly-tipping is horrendous – why should farmers put up with it?

"People in the community have called me a legend and a hero. Hopefully people will now think twice now about dumping on our land.”

A Wigan Council spokesman said they were aware of the incident and are currently investigating it.

They added: “We encourage anybody with information relating to fly tipping offences to contact us so we can take the appropriate course of action.”

This year has seen a number of high profile fly-tipping incidents which have affected farmers and landowners.

Just last week, a Lanarkshire farmer had no choice but to pay £2,000 to clean up two tonnes of raw meat waste which was dumped on his land.