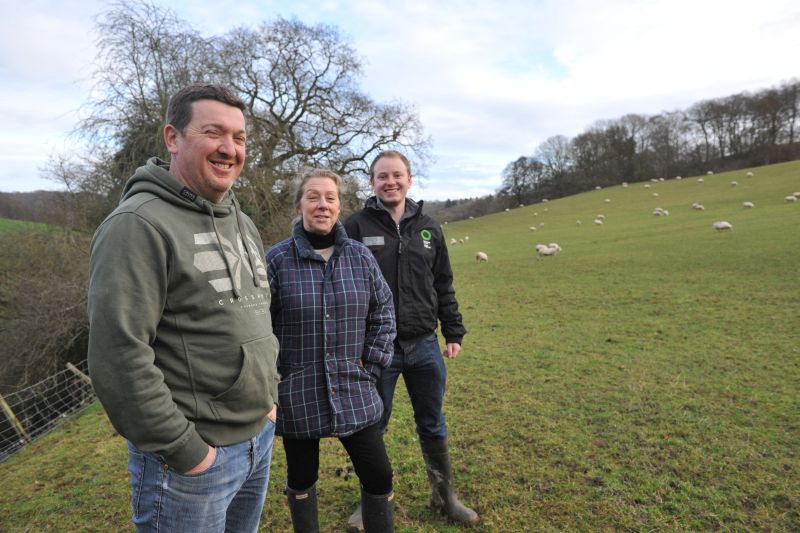 The Haynes family run a flock of 750 Mule ewes at Trefnant Isaf, Powys

The Haynes family run a flock of 750 Mule ewes at Trefnant Isaf, a Farming Connect Focus Site near Welshpool.

They introduced a total mixed ration (TMR) system with the aim of making better use of home-grown silage and to give lambs the best start in life.

The project, overseen by Lisa Roberts, Farming Connect’s Red Meat Technical Officer for Mid Wales, was put in place ahead of the 2018 lambing season.

The family invested in a second-hand feeder wagon and used this to chop and feed three big bales of silage to ewes once a day from mid-December; six weeks before lambing, soya and ground maize was added to the ration.

Feeding took around one hour a day; no other concentrates were fed to the ewes pre-lambing.

“We increased the quantities of ground maize and soya as we got closer to lambing," explained Aled Haynes, who farms 240 acres in partnership with his parents, Gareth and Ann.

Silage intakes were higher than in previous years because the forage was chopped, he reports.

“The ewes were a lot more content in the shed and they had plenty of milk, their milk supply was as good if not better than in the years when we fed concentrates."

The plentiful milk supply coupled with ewes being in good condition at lambing resulted in more lambs achieving the 20kg target weight at eight weeks – 153 lambs achieved this in 2018 compared to 111 the previous year.

This meant that the business, which supplies lambs to Waitrose at an average deadweight of 19.5kg, could sell more lambs early in the season.

Independent sheep consultant Lesley Stubbings, the advisor to the project, admitted that many farmers are cautious about adopting TMR feeding.

“They have been conditioned to think that ewes don’t eat as much in late pregnancy and they don’t like the idea of feeding forage topped up with a small amount of supplement. They fill them up with concentrates instead," he said.

As well as a mixer wagon, farmers considering TMR must have a building suitable for this type of feeding.

Analysing forage is critical to successful TMR feeding and acts as the foundation for building a high-quality mix, advised Ms Stubbings.

“Forage quality is extremely variable this year and a lot of farmers don’t have sufficient stocks but if they know the nutritional value of that feed and the body condition score of their ewes they can make decisions on how to plug that deficit," she said.

Farmers who have embraced grassland management practices such as rotational grazing are in a better position than those that haven’t, Ms Stubbings suggests.

“It has still been a tough year for them but because they were in control they were able to make decisions before things really caught up with them," said Ms Stubbings.

“It really underlines the value of knowing what dry matter you have and what your requirements are."

As a result of the difficult grazing conditions in 2018, many farmers have lean ewes and this must be borne in mind when formulating rations, said Ms Stubbings. “Lean ewes eat more than those that are in good condition."

Throughout the Farming Connect project at Trefnant Isaf, grass growth and lamb performance were monitored to ensure lambs were hitting targets.

Lisa Roberts said that a harsh spring followed by an unusually dry summer could have impacted lamb performance, but good ewe nutrition and careful monitoring of grass growth had paid off for the Haynes family.

“Crossbred lambs grew well to weaning at 12 weeks, achieving approximately 350g and 300g per day for singles and twins respectively, meaning that they more than met the 30kg target at weaning," she said.

“The TMR system has shown its effectiveness in providing lambs with a good start. Aled will strive to replicate or even improve this performance in 2019, hopefully under kinder weather conditions."

Funding for the project has been provided by the Welsh Government’s Rural Communities Rural Development Programme 2014-2020.