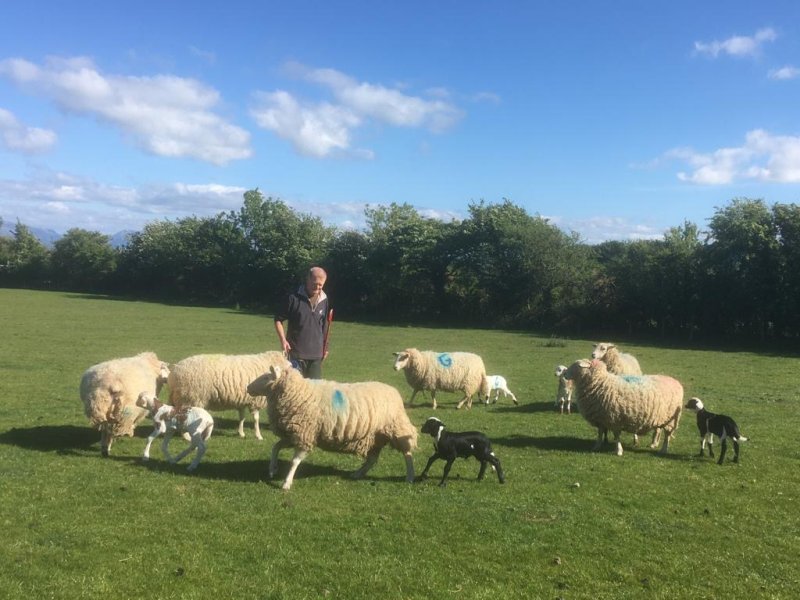 Peter Williams at his Anglesey farm, with some of the first fat-tailed Damara lambs born in the UK

The country's first spring 'Damara' fat tailed lambs have been born as part of a project looking at the feasibility of rearing the exotic breed in the UK.

Two Welsh farmers have bred a sheep native to Africa and the Middle East to help satisfy growing demand for its unique-tasting meat.

The sheep are known for their large ‘fatty’ tails and hindquarters, and are commonly found in arid, desert-like regions.

Peter Williams, from Anglesey and Snowdonia farmer Bedwyr Jones have welcomed their first two batches of both pure-breed and cross-breed Damara lambs.

In the early 1990s, Mr Williams left home to work on a 30,000 sheep farm in Saudi Arabia. He was determined to broaden his horizons and learn as much as he could about different ways of sheep rearing and shepherding.

His quest for knowledge also took him to work on sheep enterprises in New Zealand and Australia before in 1993, he returned home to work on the family farm.

Little did he think as he worked in Riyadh with the massive flock of intensively farmed Romney ewes, imported from Australia and crossed with Saudi Arabia’s native fat tailed rams, that almost thirty years later, he and Bedwyr Jones would be the first farmers to bring the ‘fat tailed’ breed over to the UK.

They both explained that there was a daunting amount of red tape to go through, with copious amounts of paperwork needing to be approved by several authorities from different countries.

Close on their heels are the cross-bred lambs, the frozen semen having been artificially inseminated into a number of Peter and Bedwyr’s flock of mainly Texel, Lleyn and Romney cross ewes last December.

With more than 50 ewes successfully impregnated - and a 75% plus success rate already resulting in more than 65 healthy lambs, with more to come - the future is looking positive.

“There are many types of ‘fat tailed’ sheep – not surprisingly their fat is deposited largely in their tails," explained Peter Williams.

"All are renowned for their lean, distinctive tasting meat which I knew from my experience of working overseas, is particularly popular among ethnic communities.

“Recent research with numerous retailers, restaurateurs and abattoirs convinced me that this speciality meat, already popular in many countries, could also appeal to a niche market in the some of the UK’s biggest cities.”

Both farmers said they are delighted that all the progeny are thriving and if all goes to plan, they plan to retain the majority of lambs as part of an ongoing breeding programme to build up numbers of this relatively rare breed.

“As the flock is thriving well so far, we’re optimistic that we can now increase numbers steadily, see how they progress and then start to set up our supply outlets, both directly and through wholesale buyers,” Mr Williams said.

Mr Hughes also submitted an EIP group application for financial support and the additional specialist knowledge needed to turn their ideas into reality.