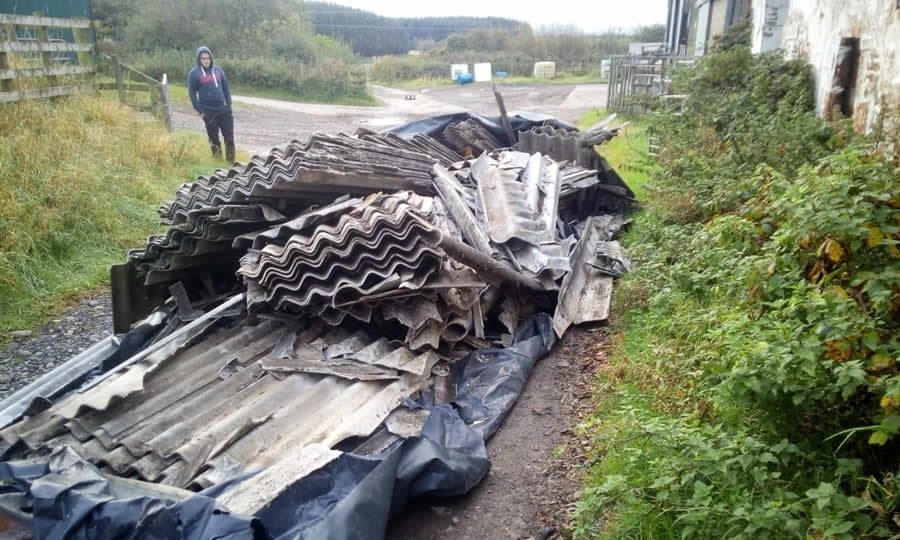 A lorry-load of asbestos sheets dumped on a Scottish farm has left the farmer facing a four-figure bill to have the extremely hazardous material cleared.

The load of asbestos was dumped at Broats Farm, near Annan, Dumfries and Galloway, in the early hours of Friday 16 October.

Due to the hazardous nature of the material, the incident was raised urgently with Dumfries and Galloway Council, Police Scotland, SEPA and Zero Waste Scotland.

However, despite a site visit by the local authority, the farm owner Jamie Jamieson may be held responsible for the uplift and disposal of the waste.

NFU Scotland’s regional manager for Dumfries and Galloway, Teresa Dougall, has been assisting Mr Jamieson with the case.

She said it was a 'hugely frustrating story', as almost every person the issue was raised with shifted the responsibility to someone else.

Without any identifiable content in the asbestos waste, she said it was unlikely that the issue would be pursued for investigation and prosecution.

Pending a crime reference number being allocated, Mr Jamieson will investigate whether his farm insurance policy will cover the cost of uplift and removal.

But due to the hazardous nature of the waste, a special licence is required, adding to the farmer's cost.

His situation is made more difficult by the fact that if he does not dispose of the dumped asbestos correctly, he may be open to prosecution.

Ms Dougall said: “Although not wholly surprising, we had hoped, due to the extremely hazardous nature of asbestos, that someone would raise their head above the parapet.

“When hazardous waste is involved, that support still isn’t available and the innocent landowner is left to carry the cost of clean-up and disposal.”

Covid-19 restrictions on local authority recycling centres earlier in the year saw a severe spike in fly-tipping incidents across the UK.

According to NFU Scotland, Scottish government and local authorities have 'failed' to address waste crime in the countryside.