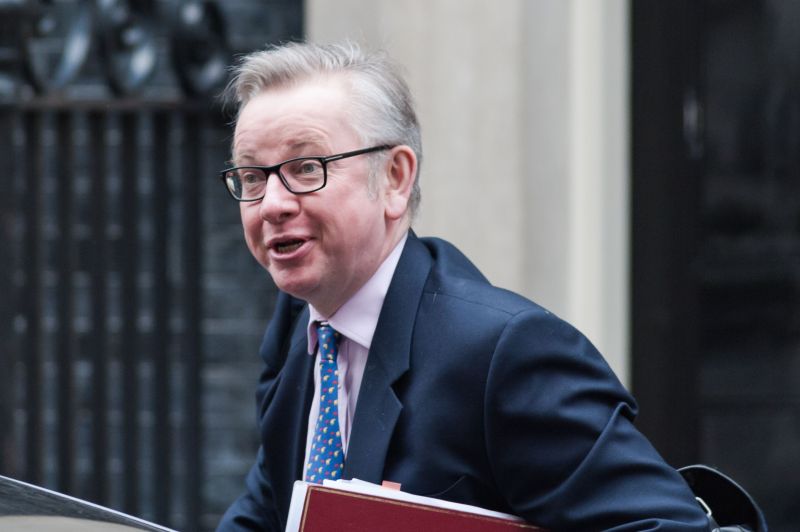 Michael Gove, who became the new Duchy of Lancaster last week, is in charge of preparing for a no-deal Brexit

The free range egg sector is looking at the possibility of compensation if the government's trade policy post-Brexit would flood the market with low welfare, low cost eggs.

Egg producers are currently preparing for the possible scenario that the UK leaves the EU with no-deal by the October 31 deadline.

It comes as the government announced earlier this year that tariffs will be removed in the event of a non-deal Brexit.

This means the cheapest egg products from anywhere in the world, with the lowest possible welfare standards, will have free access to the British market.

British Free Range Egg Producers Association (BFREPA) CEO Robert Gooch said: “Depending on the timing for Brexit and on spending reviews, Defra is researching and planning for new policies across all sectors, including free-range and organic laying hens, from 2021 onwards.

“Whatever our views about subsidies, we have to engage in these discussions and put forward our own ideas on the table”.

Roughly £3.2bn was paid in CAP direct payments to arable and livestock farmers last year, of which very little went to poultry and pig producers.

For cropping, dairy and livestock farms, payments made up 60-70% of farm profits.

Aside from direct payments, CAP subsidies also come in the form of tariffs on imports, and refunds on exports, which have the impact of increasing egg prices inside the internal EU and UK markets.

The average egg tariff across all commodities in the EU is 19% - mainly on egg products for processing - and this is maintaining the floor for overall egg prices, even though this may not be obvious given the ongoing collapse in free range egg prices currently.

'Some form of compensation'

Without those tariffs, or that subsidy, the volumes imported would increase exponentially and bear down further on the already depressed egg market.

Mr Gooch said: “It is worth looking at some form of compensation if the government’s trade policy is going to flood our market with low welfare, low cost eggs from anywhere in the world.”

As a net contributor into the EU, it is likely that the Treasury will retain £2bn out of the £3bn currently paid out in CAP payments, leaving about £1bn for agriculture post-Brexit.

Out of that 90%, it will go on environmental payments to the mainstream arable and livestock sectors in the form of the New Environmental Land Management Scheme (NELMS), leaving about 10% for animal welfare payments across all sectors.

Mr Gooch said: “£100 million per year is not a lot of money to spread across the dairy, beef, sheep, pigs and poultry sectors, so the question is whether we want some of this money or leave it to the other sectors?

“Producers have to remember that the government wants to ban beak tipping and push us further to lift welfare standards generally and this is going to cost free range businesses a lot of money, with no-one else queuing up to pay us.”

He explained that the other livestock sectors will be ready to take this money, saying that the laying hen sector needs to think carefully before walking away and leaving the money to others.

BFREPA has also been invited to contribute to Defra’s thinking for two types of scheme in England.

One is for a capital grants scheme which would go towards items of equipment, infrastructure or technology which could help improve productivity and welfare standards.

Mr Gooch said that BFREPA has provided Defra with a list of equipment that could be grant funded.

More recently discussions between industry and government have turned to the second scheme: an annual welfare enhancement payment scheme or ‘payments by results’ revenue scheme.

This scheme could give ongoing payments to producers for voluntarily meeting a defined set of welfare enhancements.

Concerns over the two schemes

The two schemes, if they were to exist, would not be linked and a producer could apply for none, for one or the other, or both schemes.

These schemes would be entirely voluntary, but how voluntary will depend on how they are delivered.

Membership of a farm assurance scheme would also be a requirement with Defra wanting the scheme to verify that the requirements had been met, which is a concern, according to Robert Gooch.

“If the money is channelled though a farm assurance scheme, such as Lion, Laid in Britain or RSPCA Assured, it follows that all producers in that scheme will be forced to produce to these enhanced standards, whether they like it or not”, he said.

“It is not a truly voluntary scheme, and producers who are not in the scheme will not be eligible for the payments”.

He was also concerned that subscribers of those marketing schemes, such as packers or retailers, would automatically factor in the income received and could reduce the prices paid to producers.

There is also the consideration that some of that money will be lost in the administration of the assurance scheme, with less going to producers for the expected enhancements.

Defra is commissioning a research project to look into the details of options for a welfare enhancement scheme.

Once that is completed next year, there will be a series of workshops to translate the research findings into policy options.

BFREPA has been invited to provide further input into a potential delivery mechanism for the scheme.