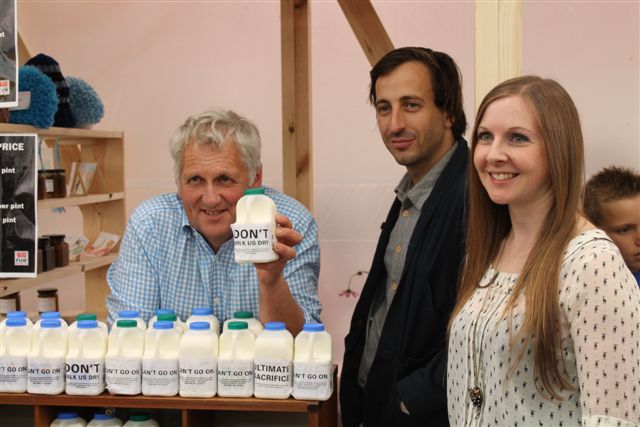 Farming and contemporary art came together when Farmers' Union of Wales representatives took part in the biggest art fair of its kind in the UK to highlight the plight of dairy farmers and the inadequate prices paid to them for their milk.

One of the participants was Spanish artist and activist Fernando García-Dory who has worked with Grizedale on various projects over the last seven years including creating a mobile cheese-making unit to be used around village halls in the Lake District.

Currently working with MOSTYN gallery in Llandudno, García-Dory invited Mr Roberts and Mrs Wright to join him to run his "Angry Farmers Milk Bar" where pints of milk were offered at a price the participant or customer was willing to pay with contributions going directly into a money box.

"Visitors at the fair took a great interest and we ran out of our printed information leaflets before the end of the afternoon," said Mr Roberts.

"Hazel and I had numerous conversations and discussions on the stall and the issues it raised were highlighted in a Guardian newspaper review."

Wales has about 1,900 dairy farmers - about a fifth of the total amount in England and Wales - yet the number of farmers has declined steadily since the end of the last century. There are now 40 per cent fewer dairy farmers in Wales compared to 2002.

Last summer the dairy industry suffered a major crisis caused by price cuts announced by retailers and processors. Although some cuts were later withdrawn, the long-term sustainability of the industry, which operates at a £1.2bn trade deficit, is uncertain.

MOSTYN visual art programme manager Nia Roberts said the proceeds of the Angry Farmers Milk Bar sales were presented to the FUW and an estimated contribution of £1 per pint was achieved. "It seems they certainly got their message across very well," she said.

García-Dory’s work can be seen at an exhibition at MOSTYN in Llandudno until January 6 next year. Used to working on socio-agricultural/rural projects, he was invited to MOSTYN to make work that responds to an exhibition by Radovan Kraguly.

Originally from Prijedor in former Yugoslavia, Kraguly settled near Builth Wells in 1970 and his artwork since then has been based entirely on the dairy cow.

Showing side-by-side in MOSTYN, García-Dory has constructed a scale-model of a Dairy Museum - something Kraguly dreamed of realising in the 90s - displaying the culture of dairy farming and agricultural production.

"Although they're not meant to be a comprehensive collection, items for the museum were loaned by local dairy farmers, including FUW members, and give a small snapshot of the dairy farming world," said Nia Roberts.

As part of the events to celebrate the exhibition opening this weekend local dairy farmers are invited to meet in the gallery at 2pm on Sunday (October 21) to discuss some of their current concerns.