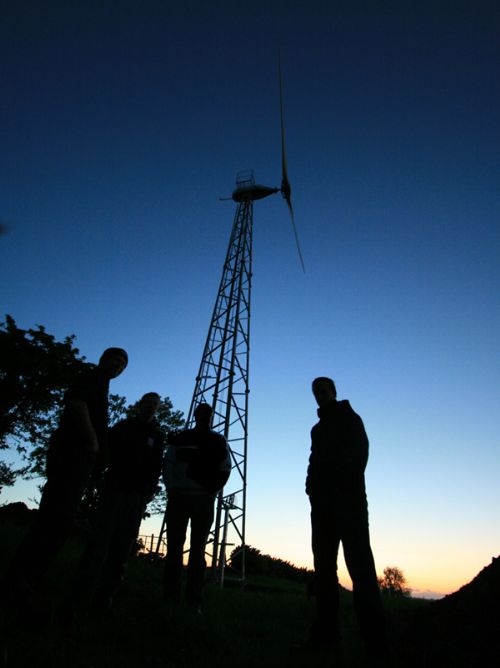 A gaia-Wind turbine install at sunset

"In a challenging sales environment, we have made excellent progress" said Gaia-Wind CEO Johnnie Andringa. "Since moving our headquarters from Denmark to Glasgow in 2006, we have generated more than 30 jobs in our UK company, not to mention the immediate service and supply chain, with the potential to double this figure in the coming years."

• Gaia-Wind created, in March 2011, a world class Global Hub integrating R&D, design engineering, assembly and testing, as well as global distribution and supply chain management – all on one site in Glasgow

• The business is growing faster than the market;

o Around 80% of sales in the UK with interest from Europe and the United States growing. In June the Gaia-Wind 133-11kW was given the best rating of the top 24 turbines available in the US

Gaia-Wind believes the results reflect a positive step-forward for the UK’s developing small wind turbine industry as a whole. The Scottish Government has stated its ambition to see every farm in Scotland benefitting from renewable energy and Gaia-Wind intends to play its part in achieving this goal.

"Being transparent about performance, potential return on investment and help with planning are key to helping our customers join the green energy revolution. Gaia-Wind is currently addressing these issues via road shows, and meetings. We also contribute to industry steering groups addressing planning concerns.

"We have seen some criticism of other vendor product claims in the renewables field. So we agree with UK Energy Minister, Charles Hendry, who cites the MCS scheme as the best consumer protection mechanism and the MCS Steering Group which acknowledges that in the case of small wind turbines in particular, the over-riding concern is for quality and consumer protection.

"To ensure reliability and safety in the product, companies like Gaia-Wind have invested very substantial sums in R&D of their small wind turbines, and in particular in the Microgeneration Certification Scheme (MCS).

"A crucial by-product of MCS is that turbines have to be independently tested. For the first time potential investors in small scale renewables can compare vital like-for-like characteristics that have been independently measured and published as part of the MCS process. Claims about, for example, small wind turbines’ noise levels, production capability and therefore potential financial returns can be compared for credibility against the MCS data.

"Renewables companies have got to be able to back up their sales techniques with the facts. At

• The turbine is UK MCS approved and eligible for the feed-in-tariff; rigorously tested in the USA and has had Danish HBO certification for over 10 years

• More than 350 turbines have been "in the ground" for a combined operational time of more than 11 million hours. That’s over 1,255 years.

• In Denmark, 77 of our Gaia-Wind turbines have been running for more than 10 years."