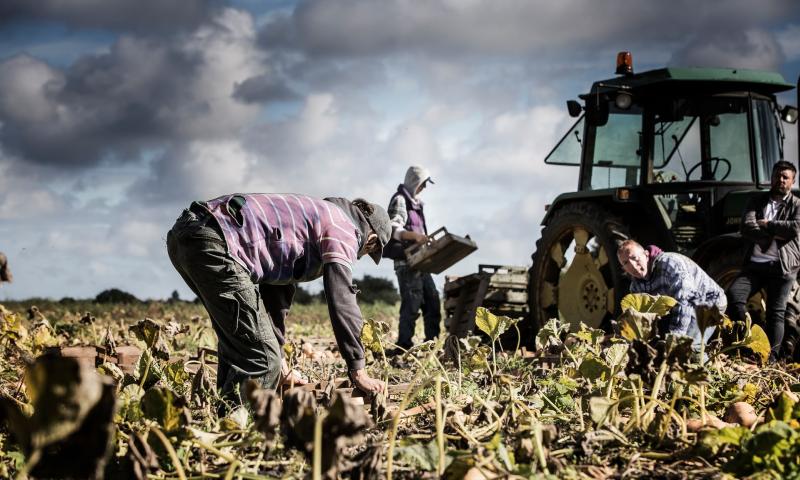 The farm workers were given as little as £20 per week by the traffickers (Photo: Stock photo/National Crime Agency)

A Polish gang who trafficked up to 400 people, with some working long hours on farms, have been jailed for a total of more than 55 years.

It follows a 'meticulous' investigation by the West Midlands police, which has been described as 'the largest conspiracy of its type ever known'.

The group of five men and three women lured vulnerable people from their homeland – including the homeless, ex-prisoners and alcoholics – with the promise of employment, money and accommodation.

But in reality they were made to work long hours in places such as farms and factories.

They were given as little as £20 per week by the traffickers who pocketed the bulk of their salaries.

They were housed in vermin-infested properties dotted – often crammed four to a room – fed out-of-date food and forced to scavenge for dumped mattresses to sleep on.

At some properties there were no working toilets, heating, furniture or hot water and some victims told how they were forced to wash in canal water.

Bank accounts were opened in victims’ names, using bogus addresses, but were controlled by the gangmasters who were handing over anything from £100 to just £20 per week to their illegal workforce.

It’s estimated the abusers made in excess of £2million between June 2012 and October 2017 on the back of their victims’ suffering and enjoyed a lavish lifestyle.

The trial judge described their trafficking conspiracy as the “most ambitious, extensive and prolific” modern day slavery network ever exposed in the UK.

It follows a report which highlighted that the farming industry is one of the most high-risk for exploitation and abuse of workers.

Nationalities of abused workers include Romanians and Bulgarians, with smaller numbers from Poland and Lithuania, it said.

The report states that the industry relies heavily on licensed gangmasters to supply manual labour, and some licence holders have been subject to scrutiny concerning possible serious labour market exploitation.

Furthermore, unlicensed gangmasters provide an option where there are difficulties in fulfilling contracts.

The report highlights the reality of individuals charging seasonal workers up to £50 for work during the crop picking seasons.