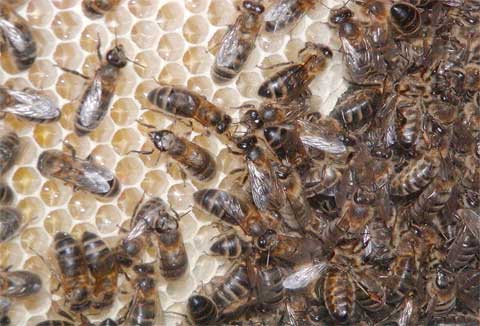 Researchers have developed a genetic technique which could revitalise the fight against the honeybee’s worst enemy - the Varroa mite.

The method enables researchers to "switch off" genes in the Varroa mite, a parasite that targets the honeybee.

The scientists say this could eventually be used to force the mites to "self-destruct".

The treatment is now at an early, experimental stage but could be developed into an anti-Varroa medicine.

Varroa destructor is widely accepted to be the major pest affecting the European honeybee, and has been linked to a worldwide decline in these important pollinating insects.

Dr Giles Budge from the National Bee Unit in York, who was involved in the study, said the mites operated a particularly "severe form of parasitism".

The human equivalent, he explained, would be having "an organism on your back that’s about the size of a dinner plate, which creates a hole through which it can feed and through which its family can feed".

"The hole doesn’t seal up - they drink blood through it and inject viruses into it."

This involves putting a tiny chunk of genetic code into an organism. This code cancels out a specific gene, essentially switching it off.

The researchers added this piece of genetic material to a solution that they soaked the Varroa mites in.

They described in the journal Parasites and Vectors that, via this soaking, their experimental treatment found its way into the mites and switched off the gene they were targeting.

Dr Alan Bowman from the University of Aberdeen led the research.

He told BBC News that the approach "fooled the immune system of the mite" into attacking itself.

Dr Budge explained that this proved it was possible to "control gene expression in the mite".

"In the experiment, we’ve targeted a non-lethal gene. Because we were able to monitor if we have successfully silenced it.

"Now, we’ll be looking to target genes which, when we silence them, the mite won’t be able to function."

In the coming years, the researchers hope to develop this into a medicine, which could be added to the bees’ food in order to protect them against Varroa.

"The mites hide in the food that is being provided by the other bees in the colony for honeybee larvae," Dr Budge explained.

"They will hide for several days in that food, so [a beekeeper could] put the treatment into the brood food and the mite, through its normal behaviour, would come into contact with that treatment."

This could solve a conundrum for beekeepers - how to tackle the mites without damaging the bees they live so intimately with.

Currently, beekeepers use chemicals, or mitocides, in carefully controlled doses to control the parasite. They even use trapping methods - physically removing mites from hives.

Dr Bowman said: "This [new method] can target the mite in the hive.

"It would be completely selective - it wouldn’t target the bees and wouldn’t affect any other pollinating insects, such as ladybirds."

Professor Francis Ratnieks, a bee researcher from the University of Sussex, cautioned that it would be a long time before this technique could be applied in the control of Varroa.

"It may be possible to use gene knockout techniques such as RNAi to learn more about the physiology of pests and to use this to develop ways of controlling them, maybe by the development and application of novel pesticides," he said.

"But to do this is a huge undertaking involving [many years] of testing and certification."