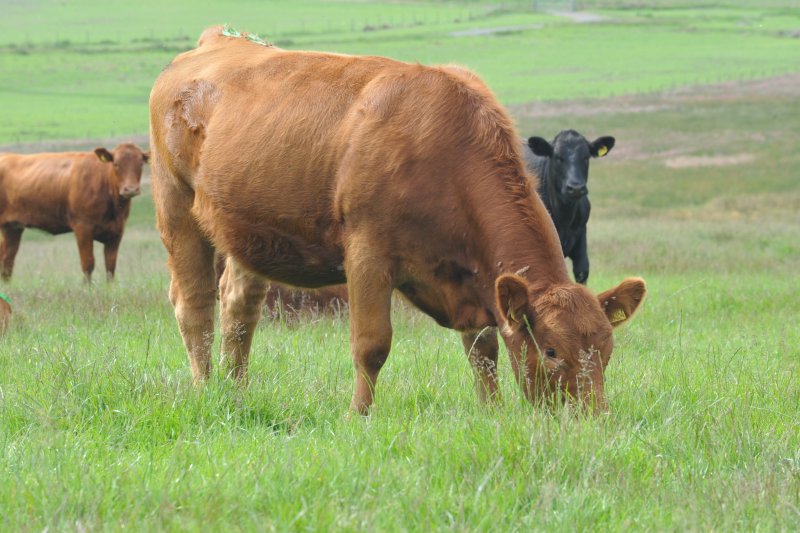 The calving period for the Jones' herd of 70 Welsh Blacks extends from January to October, but they want to reduce this considerably.

One of the measures they have taken is to fit heat detection collars to their two bulls – a Welsh Black and a Charolais - and tags to cows, which issue alerts of breeding activity.

Aled Jones, who farms with his father, Emyr, and brother, Dylan, told farmers watching a live Farming Connect digital broadcast from Rhiwaedog that the system appeared to be working well.

“We receive a text every time a cow is bulling and an app keeps a record of every cow that shows signs of bulling," he explained.

A new bull had been used this year and the technology had provided reassurance that he was working because it showed that cows were not repeating after three weeks.

“In the past we have turned the bulls out in May and hoped for the best but Moocall HEAT puts us in control and highlights any issues," said Mr Jones.

The technology also produces a list every three weeks of cows that have repeated and this allows early intervention.

Cows that haven’t conceived are given a veterinary investigation and ovulation is synchronised with CIDRs (progesterone releasing intrauterine devices). Of four animals that had CIDRs inserted, only one had repeated.

The average calving index in the herd so far this year is 376 days but this figure will increase with a few cows left to calve.

“The aim is to finish calving by the end of June every year so hopefully Moocall HEAT will help us to achieve this," said Mr Jones.

The technology costs £1,095 ex VAT for a collar and 50 tags with a £255 annual fee payable to keep the system connected to the mobile phone network.

Tags cannot be reused as each contains a microchip with ID assigned to a single cow.

Vet Dr Joe Angell, of Wern Vets, who is working with the Jones’ on the project, said it would be beneficial to have a compact calving pattern.

At Rhiwaedog, the extended calving period had caused problems with managing calving and with grouping stores for sale.

“When a calving interval is extended, that cow becomes a cost to the business and the longer the gap between calvings the harder it is to get her in calf," said Dr Angell.

There is also a greater likelihood that she will become fat and experience difficulties at calving.

“There are financial, health and welfare benefits to ensuring cows calve within the optimum period," Dr Angell advised.

The Demo Farm Live broadcast highlighted the benefit of Stoc+, an initiative run by Hybu Cig Cymru which provides farmers with one-to-one advice with a vet.

John Richards of HCC said that of the farmers who had signed up, over 50% had done so because of fertility problems in their herd.

“Margins in beef can be exceptionally tight, the ideal figure for calving interval is 365 days but if it can be brought down to as low as 400 then the herd is in a better place," he said.