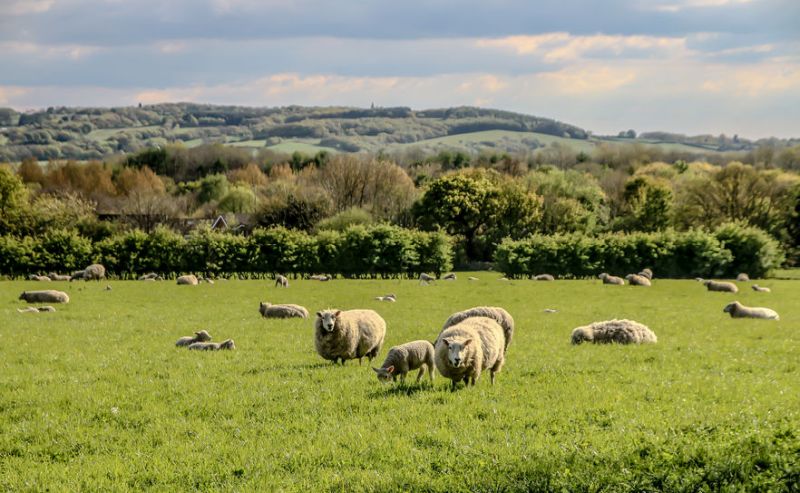 Weight at tupping can have an important influence on conception rates in ewe lambs, a study at a Welsh farm suggests.

David Lewis breeds from his ewe lambs to improve the efficiency of his flock – most sheep producers in Wales hold ewe lambs for a year to breed as yearlings but this means losing 12 months of income.

However this needs to be balanced with the lower fertility and prolificacy rates of these animals compared to adult ewes due to lower ovulation rates and higher embryo mortality.

Mr Lewis, who farms at Halghton Hall near Bangor-on-Dee, is hoping to increase conception rates by embarking on a project in his role as a Farming Connect demonstration farmer to establish the optimum weight and condition for this.

In previous years, his success rate with getting ewe lambs pregnant has averaged 60% but he aims to increase this to 85% over the course of the three-year project.

However this was not possible in the 2020 lambing season as he needed to finish lambing early therefore rams only ran with the ewe lambs for one cycle at tupping, instead of the normal two.

This resulted in a conception rate of 57% but what the study did show was a definite pattern of the heavier animals scanning better.

For the trial, the lambs were split into three separate weight groups - under 41kg, 41–45kg and over 45kg, but all ran together.

At 98% scanning and a 76% conception rate, the heavier animals performed the best of all the groups.

Independent sheep expert Kate Phillips, who set the key performance indicators (KPIs) for the Farming Connect project, said ewe lambs failing to meet a target weight of 45kg at tupping will have contributed to the lower conception rates.

She says ewe lambs need to be well-grown to achieve puberty - 60-70% of their mature bodyweight – so she recommends selecting the stronger lambs, possibly from well-grown twins, for mating.

These lambs must grow at 200-250g a day until six weeks post-tupping: “They need to be growing at the pace of a finishing lamb, either on roots or good quality grass," Mrs Phillips advises.

“They have to have a reasonable amount of feed in front of them, they can’t just be left on a hillside or on poor grazing."

It is important to scan at eight to ten weeks post-tupping, to identify animals carrying more than one lamb, but farmers should also expect a higher percentage of empties within a group of ewe lambs.

“Realistically, you wouldn’t expect any more than 80% to be in lamb but perhaps less if they are only with the ram for one cycle," says Mrs Phillips.

Data from the 2019 tupping season at Halghton Hall will be used as a benchmark to build on for the next breeding programme in October.

Although the heavier ewe lambs had the best conception rates, Mr Lewis says there are reasons why these might not be the best flock replacements going forward.

The heavier lambs tend to be the singles and hence might not be as prolific, he suggests.

“When we have a single she mostly produces a single at each lambing so that must be a consideration for our flock prolificacy."