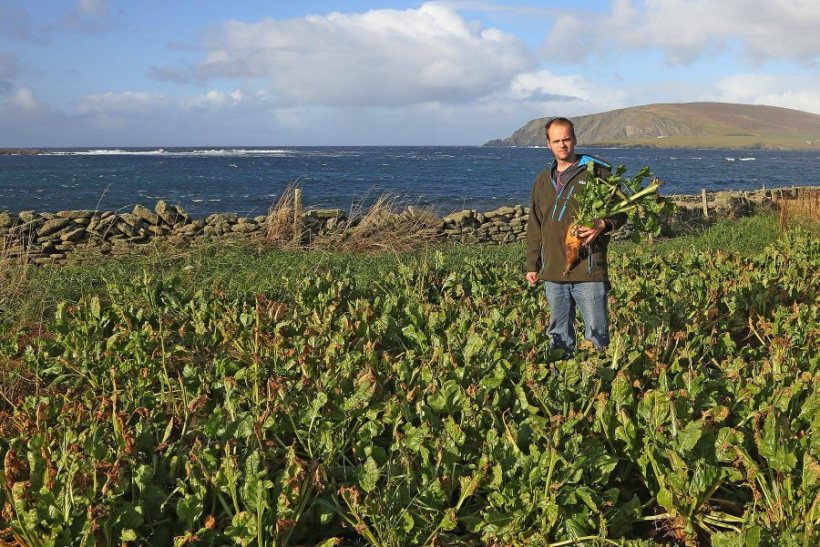 Farming in the Shetlands brings many challenges including a shorter grazing season, strong west and south-west winds and salt spray from the sea damaging soils.

Farming in partnership at Scholland farm with his father John, the duo own and rent 320 hectares.

Ninety commercial Aberdeen Angus cows make up the foundation of the herd, which run alongside 1,000 Lleyn, Romney and Texel cross breeding ewes.

“The progression of our business has been partly focused on increasing output through a higher stocking density and increased cattle fattening performance, but most importantly, it was been driven on reducing costs,” says Leslie.

The entire spring calving herd are put to an Angus bull and he aims to keep the calving period as tight as he can, allowing cows nine weeks and heifers six with the bull.

Any cow not in calf after nine weeks is not kept said Leslie, who is a firm believer that herd fertility is a huge profit driver.

A select number of heifers are retained each year for replacements, with the remainder of the progeny predominantly finished and sold through a local butcher.

He says: “We have worked alongside the same local butcher for over 10 years and supply two cattle per week for up to five months of the year. The butcher requires a 300-320kg carcase of prime beef.”

“In 2019 our cows scanned at 100% and heifers 105%, I don’t think we will ever repeat that again. Animal performance comes at a cost, so we must reduce these costs where possible.

"Individual animal performance is key alongside decent stocking density which gives us enough finishing animals to turn into profit.”

With freight costs for feed and straw between £50-80 per tonne, winter can be an extremely expensive period, which led Leslie to look at alternative ways to help cut costs.

"We aim for our calves to grow approximately 1.25kg per day whilst still with their mothers and then once weaned, introduce them to a store ration during their first winter to keep feed costs down.

“Four years ago, we adopted a deferred grazing system for our cows after weaning. This, coupled with early turn out of youngstock, meant in 2017 we only had our cattle inside for 58 days, when historically we housed them for five to seven months.”

The paddock grazing system at Scholland is a simple leader-follower system, with ewes and lambs leading, and cows and calves following.

“Our leader-follower system gives the young lambs the very best start and we have increased weaning weights by 2kg.

"The cows manage really well on cleaning up behind the sheep and it has also allowed us to change from housing all cattle in November to housing the last ones in February, saving over £90 per cow on winter feeding and machinery costs.”

Leslie adds: “Paddock grazing for our fattening cattle compared to set stocking has increased our output per hectare by 117%. Individual animal growth increased from 0.93kg to 1.35kg per day and we still managed to increase stocking density by 50%.

“This winter we plan to graze weaned steers on fodder beet and hope the change will half winter feed costs again as well as improving daily liveweight gain. If we can get it right the benefits are huge.”

Being as self-sufficient as possible and having a firm handle on performance has helped Jamie put the farm in good stead to face future challenges.

He uses a farm modelling and decision support tool to help analyse what they are doing within the current year, to model scenarios, and plan for the future.

“In the last five years we have dramatically changed the way we farm,” highlights Leslie. “By using the farm management software, we have been able to collate information, benchmark, and drive our business forward focusing on key aims and objectives.”

“At Scholland we aim to farm in a profitable, exciting and progressive way, whilst making the best use of resources and looking after our land and livestock to the best of our ability.”