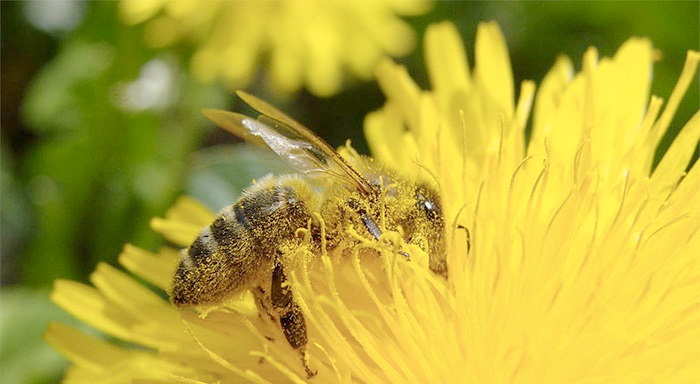 Monitoring the brood would enable beekeepers to get a good indication of the health of the queen, as well as how ‘dynamic’ she is

The buzzing of bees can provide beekeepers with crucial information about the fertility of the queen in the hive, according to a new study which could play a key role in helping to preserve honeybee colonies.

Research led by scientists at Nottingham Trent University focused on developing a way to remotely monitor the ‘brood’, or reproductive, activity in the hive – something which is essential to the overall health and survival of a colony.

By detecting and translating vibrations caused by the buzzing of bees, the researchers were able to indirectly determine the absence or presence of a laying queen, specifically whether a brood cycle was occurring, and what stage it was at.

Monitoring the brood would enable beekeepers to get a good indication of the health of the queen, as well as how ‘dynamic’ she is.

The work, published in the journal PLOS ONE, involved embedding tiny accelerometers – devices sensitive to minute vibrations – in the honeycomb of a series of hives. This enabled the team to monitor vibrational amplitude and frequency information to identify honeycomb load changes and patterns of buzzing which shed light on the brood cycle status.

The researchers have also developed a prototype device which, based on the vibrational signal from the hive, would enable beekeepers to receive wireless, instant, alerts – via email or SMS – relating to the health of their colonies.

The work – which comes as honeybee populations continue to decline – would make it possible for beekeepers to take swift remedial action to protect their hives, before a colony perishes.

It could also pave the way for beekeepers to reduce the amount of visits and inspections they have to carry out, regardless of hive conditions.

Unnecessary visual inspections can place substantial stress on a hive. The daily activities of the hive are disrupted for some time after the inspection, the queen can be inadvertently killed, leading to the overall failure of the colony, or the colony can be disrupted by cooling down the brood, which needs to remain at 34-35 degrees Celsius.

As well as the occupational hazard of getting stung, it can also take up a huge amount of the beekeeper’s time, as every hive must be inspected every eight days during the swarming season, and commercial bee farms can have many thousands of hives.

In the case of a queen in poor health – or absence of a fertile queen – beekeepers might need to check that the colony isn’t diseased, consider introducing a new queen, or unite the remaining bees with another colony.

The brood cycle only stops during winter – it should be visible in a healthy hive from late February to late November – and is the means by which a colony sustains its numbers and continues to thrive.

The cycle starts with an empty honeycomb, which the worker bees clean before the queen fills the cells with eggs. These then ‘hatch’ to become grubs and the cells are capped with beeswax when they pupate, before emerging as adult bees. When one frame is filled, the queen moves to the next frame and the process is repeated. Each cycle takes about 21-24 days.

Dr Martin Bencsik, a physicist in Nottingham Trent University’s School of Science and Technology, said: “It is essential that we find new affordable ways which can accurately – and less invasively – assess honeybee colony status. This could help the beekeeping industry which is presently facing difficult times.

“Queen bee health is central to the health of an overall hive; we believe our work will soon help the beekeeping practice, particularly by reducing the need to unnecessarily visually inspect some healthy colonies.”

The study also involved the National Institute for Agricultural Research (INRA) in France and the Beekeeping Centre of Research and Information (CARI) in Belgium.

It is the latest in a series of studies involving the ‘Swarmonitor’ consortium – initiated by Nottingham Trent University and the Bee Farmers Association of the United Kingdom (BFA) – which shows how buzzing may indicate specific health disorders, or deterioration in the hive.

The consortium also involves the European Professional Beekeepers Association (EPBA) in Germany and SMEs CAPAZ GmbH of Germany and SZOMEL Services and Trade LLC of Hungary and ARNIA LTD of the UK.