How two new entrants found their route into agriculture 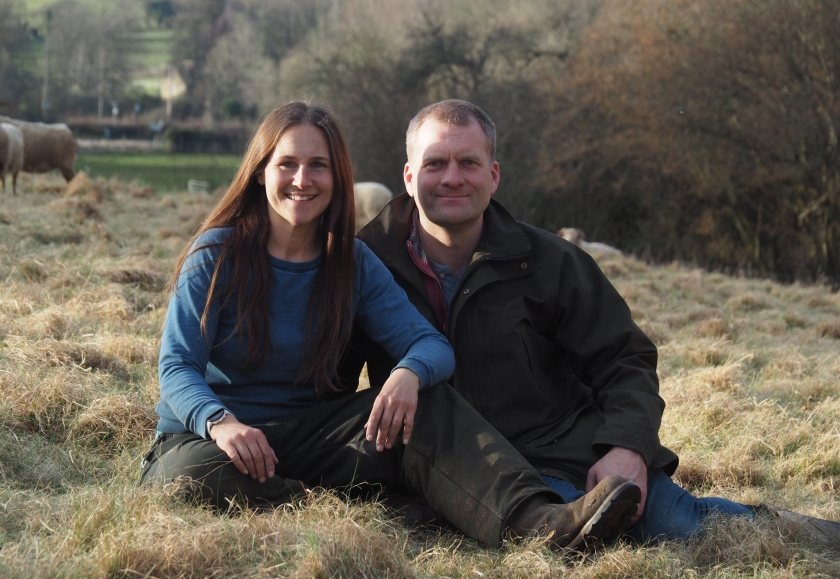 Cotswold based couple James and Katie Allen have been able to pursue their farming dream through conservation grazing.

James and Katie Allen have grown their conservation grazing business, Heritage Graziers, despite having no farm and no existing ties to agriculture.

They balance the running of the business alongside looking after five children and James’s full-time day job in education software.

James grew up a long way from the world of agriculture in South East London: “Farming was something that had never occurred to me as a career,” he noted.

“Once a year we would go to visit some distant family members who had a farm and we would help out with lambing, but beyond that I had no involvement in agriculture.”

After finishing school, James went to the University of Nottingham where he studied civil engineering, before becoming a specialist in oceanography.

At 27 he used the data analysis skills gained from his degree to train in computer programming. None of this seemed to be leading to a future in farming.

“Then around 15 years ago I was living with my first wife and for no real reason I really fancied keeping pigs,” James said.

“I found a family in our village and together we kept a few pigs at a time for five years, until I went through a divorce and moved away.”

He later met Katie who was living in Cornwall running a smallholding and a couple of years later they moved in together in the Cotswolds, where James was living.

Katie owned a small flock of sheep at the time, bought with the intention of setting up a wool enterprise, and she really did not want to be leaving them behind.

“I told her she should bring the sheep up to the Cotswolds with her. So, she rented a piece of land for them and brought them with her," James said.

"After a few years looking after the sheep, we decided we wanted to grow the livestock and get some cattle as well.”

“I began looking into it and I came across conservation grazing. There was the possibility of getting paid to graze your animals, which made us realise that perhaps this was something that could work more seriously, and it set the ball rolling.”

Conservation grazing uses grazing as a tool to maintain species rich grasslands and ancient wildflower meadows with the focus being on the grazing site not the livestock.

This often involves grazing overwinter to clear off any dead vegetation, then taking the stock off at the end of April for the flowering season, before grazing again at the end of summer.

“Rather than it being about rearing cattle to be as productive as possible, conservation grazing is about creating wildflower meadows and species rich habitats that are in the best possible natural condition,” James explained. 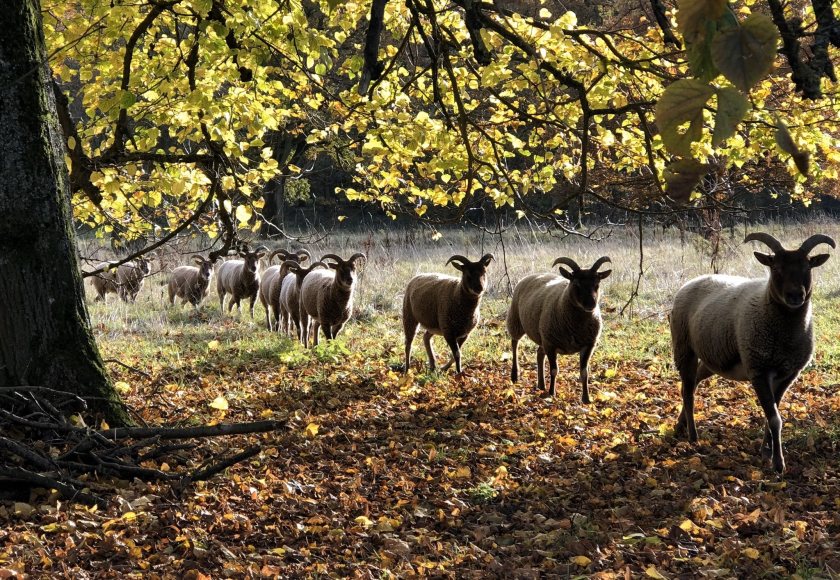 “What is unusual about it is that the grazier is often paid for the grazing services they provide for landowners.

"The livestock do not put on the same condition as they would on typical grassland and you cannot provide supplementary feed, so without a payment it would not be viable.”

Ancient wildflower meadows are now extremely rare in the UK, but the Cotswolds is home to an unusually high concentration of them.

James said: “A standard ryegrass field is a monoculture, but these meadows are incredibly species rich, sometimes in a 4 metre square you can find 100 orchids.”

The couple got their break into farming grazing their cattle and sheep on wildflower meadows for private landowners.

In the summer, they rented pasture from a local semi-retired farmer, where they kept their stock during the flowering season.

It has not been plain sailing for the couple since they made their move into farming: “Not having our own land makes it really tough," James said.

"The fencing we are dealing with is often poor, as is the access to water and equipment.

"We usually cannot set things up as we would choose to, making it hard work.

“For years we had to move the cattle between different sites and none of them had easy access, I have had plenty of scares nearly losing trailers down steep slopes.

"If we were moving 15 cows it would usually take three or four trips, and then there was also the sheep and the large, heavy handling equipment as well.”

James and Katie said that balancing the running of the business alongside the rest of their lives is a real challenge.

“I also have a full-time day job”, James explained. “Katie does all the stock checking during the week, then in the evening we get the paperwork done.

"On the weekend we do bigger jobs like putting up electric fencing and moving livestock. That is alongside the usual pressures of dealing with five kids.”

Around two years ago the couple were approached by a large estate that wanted them to graze their wildflower meadows and cover crops on their arable land.

There they have focused on helping create and maintain the wildflower meadows on the estate and also improve soil health on floodplain meadows and arable fields by employing regenerative grazing practices. 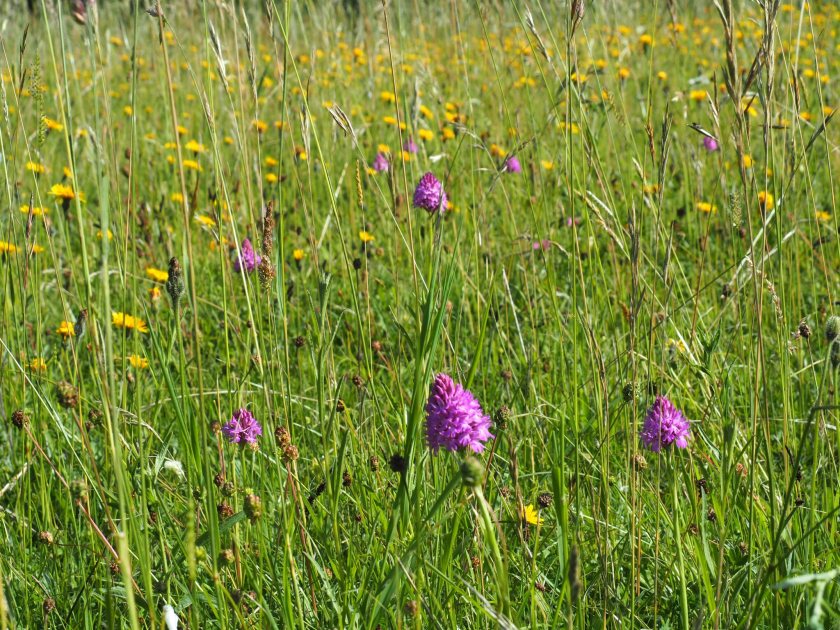 James said: “With that additional work, as well as the birth of our son, I now take one day a fortnight off the day job to devote to the livestock.

"That is making it a bit easier to manage things day to day.”

There are other aspects to James and Katie’s business too; they sell their own meat boxes and Katie has set up a knitwear business, ‘Loopy Ewes’, working with the wool from the flock.

“Not owning land shuts off other diversification opportunities, so it is important that we make the most of everything we do”, James explained.

“The meat we are selling is high quality, slow grown, native meat, and so it is a premium product. We put a QR code on it so people can see the exact history of each animal, and we are seeing a strong market for it.”

Katie previously worked in marketing which has helped with promoting the meat boxes, as well as with developing her knitwear business, which has proven extremely popular.

“Katie originally got the sheep with a view to doing something with the wool,” James added.

“It is an amazing material, but so much of it goes to waste. Like with the meat boxes, Katie is selling a premium product, with a strong provenance, direct to the consumer.

"It has done extraordinarily well, considering that when she began the venture she knew nothing about textiles.”

James and Katie are hoping that they can bring more stability to their business in the future.

James said: “What we really dream of is longer term security from a farm tenancy.

"A tenancy would give us the reassurance to invest time and money in setting up systems on farm that would support our grazing methods and enable us to be more efficient and productive.

"We would love to be able to monitor over a long period how land could evolve and flourish under our pasture-based regenerative approach,” he added.

“Tenancies are incredibly rare, but if we were going to apply for one I think with the experience and stock we now have behind us, we would stand a far better chance than we would have done a few years ago.”

“The dream is to be in a position where I could give up the day job and look out of my window and see the cows grazing.”

James said that he would like to be in a position where he could do more to promote conservation grazing as an opportunity for the younger generation to get into agriculture.

“The industry knows it has a problem with the average age of farmers, and it would benefit from having young, enthusiastic new entrants who are not restricted by old habits.

“Everyone within the industry has a roll to play in supporting new entrants. It is hard going into agriculture as a new entrant, but if you have confidence and belief it can be done.”