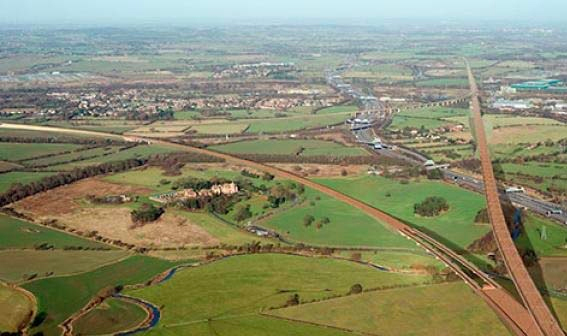 Former Transport Minister Simon Burns' assurances of 'fair and generous' compensation has been ignored in the Department's consultation for those affected by HS2, according to the Country Land and Business Association.

The CLA and the NFU, which has been leading the debate in Westminster, have submitted evidence to the consultation after working closely with MPs.

Following a challenge to HS2’s initial compensation package in the courts, the NFU said farmers and landowners along ‘Phase 1’ of the line between London and Birmingham will be impacted massively and wanted to ensure those affected are treated fairly.

More than 100 NFU members are directly affected by the route and the NFU remains seriously concerned over the impact the scheme will have if Parliament gives the project the go ahead. These include the proposed Long-term Hardship Scheme which the NFU believes should be applied to all properties that are affected including all forms of business and all interests in land.

CLA President Henry Robinson said: “Landowners, farmers and rural businesses who will have land taken by HS2 have already lived through years of uncertainty.

“Those who remain in situ throughout the construction process will suffer the noise, dust, traffic, disturbance and disruption caused by more than a decade of HS2 construction.

“The consultation does little to address this and we urge the Government to look again at delivering a fairer system.”

CLA Chief Surveyor Andrew Shirley said while there are valuable options for a long-term hardship scheme, it is predominantly aimed at residential properties.

He said: “Proving hardship to an independent panel is often very difficult as demonstrated by the high number of rejections from the existing Exceptional Hardship Scheme.

“Many agricultural and rural businesses will have land outside both the safeguarded area and the proposed Rural Support Zone, therefore the discretion as to how HS2 deals with these properties offers little comfort.

The Association said the consultation offers the opportunity for discussion about a Property Bond Scheme but the time based model chosen by the Department for Transport falls short as it relies on the indexing of historic property values, rather than up-to-date figures.

Shirley said: “The proposed CLA Property Scheme takes account of current property values and the real impact HS2 will have.

“Uniquely, the scheme would secure up-front compensation for farmers and businesses who have already suffered years of disturbance.

“This would allow re-investment decisions to be taken in a timely manner, so that the business can continue to develop despite HS2.”

NFU head of policy Dr Andrew Clark said: “It is the interpretation of the criteria for ‘hardship’ that lies at the core of why this proposal is fundamentally flawed and why we urge the Government to reconsider replacing it by a Value Based Property Bond Scheme which could be applied in and outside of the ‘rural support zone’. This would enable the functioning of the housing market and for those eligible for compensation to receive a fair and reasonable settlement. A Value Based Property Bond scheme would also enable the government to meet the criteria it has highlighted as being the most appropriate to achieve long-term discretionary property compensation.

Dr Clark said given the major impacts of the project along its route, including to many farming families and their businesses, some who have been there for generations, it is vital that there is a clear and widely accepted business case before the project is given the green light.

“The High Speed 2 project, as proposed, would be the largest single infrastructure project in the UK. This proposal has already caused significant distress and disruption to hundreds of farm businesses along the proposed route, as it has to many local communities and businesses. For scores of farming families High Speed 2 will destroy their business permanently. The Government has now published its detailed plans for the route between London and Birmingham with plans to begin construction in 2017.

“Given the major impacts of the project along its route, including to many farming families and their businesses, it is vital that there is a clear and widely accepted business case before the project is given the green light. If the project proceeds, the NFU will use all its influence with the Government, High Speed 2 Ltd and with MPs to ensure that robust arrangements are in place to minimise HS2’s impact on farm businesses, for prompt and enhanced levels of compensation and a binding duty of care during the construction phase.”