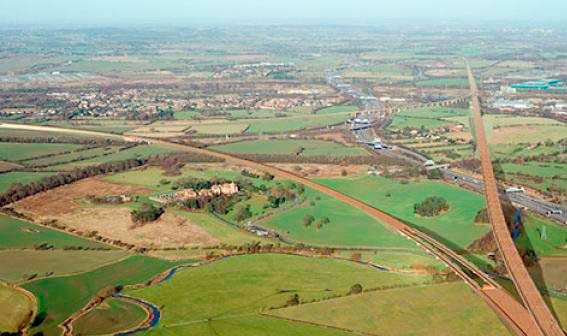 The Environmental Statement is an assessment of the likely significant environmental effects of the proposed HS2 railway between London and the West Midlands. Prepared by independent consultants, it reports on the effects of constructing and operating Phase one of HS2 from an environmental point of view.

Dr Andrew Clark, NFU Head of Policy Services, said HS2 needed to do more work to ensure all farmers were fully aware of the impact the project was likely to have on their businesses.

He also said the Environmental Statement made no distinction between the amount of land needed for the line itself and the land being taken to create wildlife habitat and mitigate its environmental impact.

“HS2 presents a potential double-whammy for farmers,” he said. “Firstly, the significant areas that have been highlighted for habitat creation and tree planting will be taking land out of agricultural production. This is unacceptable, given that farm land is already being lost to the HS2 line.

“Second, we would also argue that any new habitat created should simply replace what is lost, not create vast new areas building on the bigger and better principle.

“HS2 also needs to do more to make sure all farmers have been contacted and properly informed so they fully appreciate the impact on their businesses. If compensatory open space is going to be required and created it should be done through direct negotiation with landowners. It should not just appear on a map.

“It’s vital that the Environmental Statement includes more bridges and underpasses for severed farmland. Farm businesses must be provided with access to a severed block of land to enable the business to remain viable. Importantly, this access needs to be fit for purpose. The width of agricultural machinery, along with its weight, will need to be properly considered in the planning for new tracks or bridges.”

Dr Clark said the NFU also had concerns with the accuracy of the information included in the Statement about the temporary and permanent effects of HS2.

“It is essential the amount of land being taken permanently and temporarily should be clearly highlighted. The percentage of land within the affected counties is significant and will have a major impact on individual farm businesses. We feel the Statement has not taken this impact into account. We continue to question the public investments in HS2; it should offer a positive return,” he said.

The Country Land and Business Association also said the document ignored the impact on landowners who are 'increasingly losing land.'

The organisation said the extra time gives landowners the opportunity to consider the 50,000-page document which looks at environmental issues and details environmental mitigation measures.

But the document does not give sufficient detail on how individual habitat mitigation will be delivered and why the use of compulsory purchase is necessary.

CLA President Henry Robinson said:”The Environmental Statement should not only show the exact location and extent of each habitat being taken, but also justify the area that is required to mitigate that particular impact. Every acre taken as environmental mitigation is an acre taken out of economic productivity forever.

“Compulsory purchase should still be a last resort, particularly where commercial solutions may be available through Biodiversity Offsetting.”

The extension is the second time in a week that the public have been given more time to respond to the consultation on the environmental impact of HS2.

CLA Chief Surveyor Andrew Shirley said: “We have several members who were initially losing a little land, but now the amount has ballooned from the initial drawing through to the draft and the final statement – all in the name of environmental mitigation.

“While there may be a desire to deliver what has been described as the ‘greenest railway’, this should not be achieved at the expense of landowners.

“The HS2 Bill gives extra powers for HS2 Ltd to grab more land for development and regeneration, as well as sweeping access provisions over Phase two which is not even part of this Bill.”