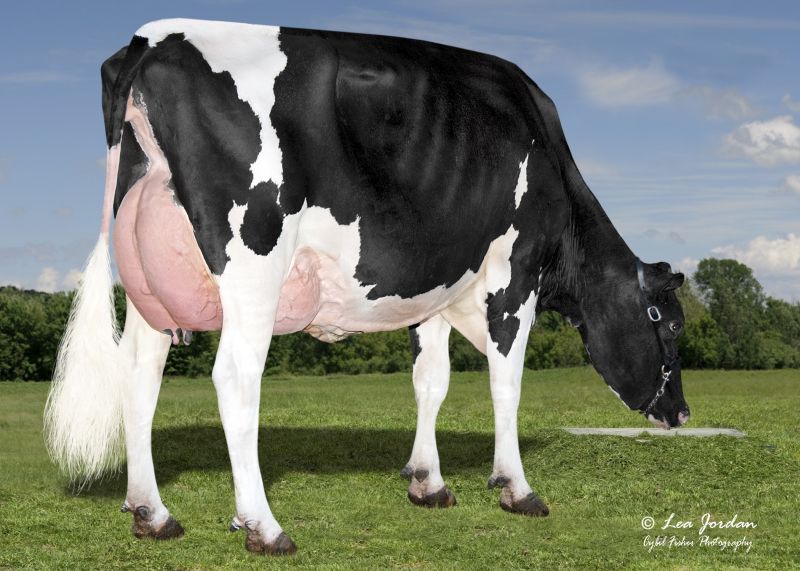 Having graduated in the summer from the genomic list and into second position amongst proven sires, he now edges upwards as more daughters come into milk in his native North America, earning him a PLI of £788.

Bred on an increasingly successful family farm in the heart of dairying country in Wisconsin, Topshot joins his herdmate (Bomaz Fynn), who leads the way in the genomic rankings, doubling up this family’s success and reflecting their policy of breeding for traits which feature in £PLI.

A son of the UK-owned Cogent Supershot, Topshot’s Predicted Transmitting Abilities (PTAs) for production include an impressive 1151kg milk and 35.3kg protein while he also transmits favourable Lameness Advantage, at +3.3.

This Cashcoin son has the best Lifespan Index (LS) of the top 20 sires at +225 days. (A separate press release explains the new units for Lifespan.)

He combines this with strong daughter Fertility Index (+12.4), good Lameness Advantage (+3.2) and one of the best Maintenance Index figures amongst the top £PLI bulls, at -13.

This indicates his daughters require less feeding simply to sustain themselves than the average UK cow.

New entries can be found in third and fourth positions in the form of Seagull-Bay SR Stardust (PLI £732) and Peak AltaRecoil (PLI £728).

Both are sons of AltaSpring and display strong daughter fertility figures at +12.4 and +13.4 respectively.

The prolific producer of top genomic young sires, Melarry Josuper Frazzled moves up to fifth position, confirming his transmission of high milk yields (1097kg milk) with excellent udder health (-38 SCC, -3 Mastitis) and calf survival (+3.9). A Josuper son, he weighs in with a PLI of £721.

Another superb calf survival (CS) bull is the sixth-ranking Siemers Bloomfield (£716 PLI). With a CS of +4.4, he’s the best in the top 20 and also has good cow lifespan figures at +219 days. He combines these fitness traits with a strong +0.32% fat.

Seventh ranking AOT Silver Helix is the highest production transmitter available with an incredible +52.6kg fat and +39.6kg protein, helping to earn him at PLI of £712.

His PLI of £710 reflects his transmission of high milk quality, particularly for protein (+0.13%).

Former number one sire VH Balisto Brook has been edged downwards to share eighth place with Perks, but remains the best udder health improver in the top 10.

Longstanding top £PLI sire, Co-op Robust Cabriolet rounds off the top 10, now with 761 UK daughters earning him a reliability of 99% for his production figures, the highest in the top 10.

Other new entrants just outside the top 10 are 11th-ranking polled bull, OConnors Soccer Ball P (PLI £707), notable for good daughter fertility (+12.3), 13th-ranking ABS Achiever (PLI £704), who is already proving himself as a successful sire of sons, and 15th-ranking ABS Mayday (PLI £692), who improves both udder health and conformation.

Marco Winters, head of animal breeding with AHDB Dairy, said: “This generation of daughter-proven bulls endorses their earlier selection based on genomic indexes.

“With the benefit of daughters now milking, some of their figures remain at truly exceptional levels, even exceeding the young sires.

“This includes cell counts as low as -38 and weight of fat as high as +52.6kg. Both of these figures represent important commercial traits which can help those who choose bulls like these earn more money from their milk.”