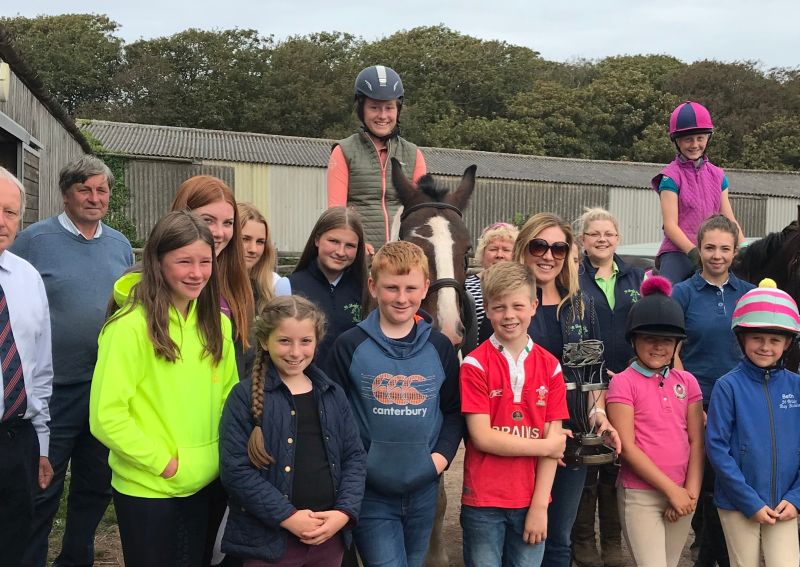 The stables work alongside the mixed dairy farm at Pearson Farm, St Brides

An innovative pony venture based in Pembrokeshire has been recognised with a major farming business award.

When Lucy Lewis, a primary school teacher, decided to convert an old potato chitting greenhouse into a stable block for 7 horses in 2014, it looked like a bumpy ride ahead.

The idea first came when she was out riding with a friend on a cold winters morning and after mulling the idea over, the decision was made to give up teaching in the classroom and take it outside.

Lucy said: “Dad always said to me don’t make horses your work and so I became a primary school teacher.

“And I really enjoyed spending time with the children in the classroom but at the same time I was looking after the horses and helping out on the farm. It was getting a bit much and I knew something had to give.

“I still wanted to teach and spend time with the children. So by having children’s riding ponies at the yard I was able to create a flexible business around our family farm life, whilst meeting the needs of the community.

“We have made some great friends and are so delighted with the way our riders have embraced life at the stables; treating the ponies with great affection and understanding how the yard runs,” she said.

But it wasn’t an easy start and the initial idea for a livery at St Brides Bay Stables, Pearson Farm, St Brides, Haverfordwest, had to go through a rethink.

Lucy brought her daughters’ two ponies to the yard, to share with local children and the business has been racing to success ever since - and even earned her the coveted Farmers’ Union of Wales (FUW) Pembrokeshire Business award.

The stables work alongside the mixed dairy farm at Pearson, where Lucy takes an active role with the youngstock, farming with her husband Geoff.

Pearson Farm has been in the family since the 1860s and St Brides farm was purchased in 1982 by Geoff’s parents John and Mary Lewis.

Today the family milk 300 dairy cows and have 200 beef cattle and 200 followers.

They also grow 110 acres of winter barley, 80 acres of maize for the dairy herd and 120 acres of potatoes, including salad potatoes, early baking potatoes and main crop potatoes, all of which is sold to Puffin produce.

Geoff Lewis, who is the 4th generation of farmers at Pearson farm, said: “In 2009 we put a cold store at Pearson’s for storing potatoes which also gave us the facility to store seed potatoes. By doing that the chitting potato shed at St Brides farm became redundant.

“And then Lucy had the idea of the stables. We had reservations at the start but it’s going from strength to strength and I’m really proud of how she has made the business her own.”

Today the facilities include a floodlit sand school, tracks have been made through a woodland area making an interesting and safe off-road ride and Lucy has designed a “track” system around the grazing paddocks, preventing pony laminitis and boredom.

The pony loans are structured, with each pony being shared by up to six riders and the business now has 22 ponies and 14 stables.

Explaining how she took the business further, Lucy said: “I wanted to offer something completely different to just hacking and lessons.

“The ponies are selected to suit everyone, including children with disabilities, and we make sure that they can enjoy caring for their loaned pony as if it was their own.”

She added: “We take the ponies out for a walk and show the children how to groom them. It just allows them to learn about horses in a relaxed, friendly way.

“Overall it is a great opportunity for those who love horse riding to enjoy the experience without the day to day responsibility and expense of buying a pony.”