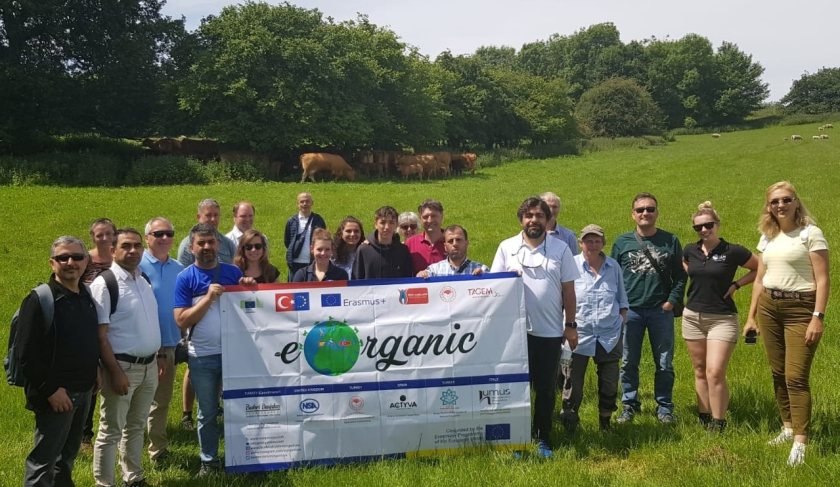 The farmers were treated to a week of learning, teaching and training centred on UK organic farming practices (Photo: NSA)

Fourteen international sheep producers from Turkey, Spain and Italy were recently in the UK to learn more about organic farming practices.

Sharing the insights, the National Sheep Association (NSA) welcomed and acted as host to the group, which arrived as part of an EU Erasmus funded study tour.

The farmers, vets, lecturers and advisors were treated to a week of learning, teaching and training, beginning at FarmED, a demonstration farm in the Cotswolds.

Jonty Brunyee, FarmEd head of sustainable farming, highlighted the background story of the centre, and discussed how the farm, bought in 2010 by Cotswold Seeds, began its journey and became what it is today.

The international cohort heard about the enterprise diversification and the role of organics and regenerative farming principles on the 107-acre site.

FAI uses holistic planned grazing and focuses on regenerative principles, enabling the farm to outwinter all their cattle despite it being on heavy, clay soils and being on a flood plain.

The sheep producers' second day saw a return to FarmED to learn more about the role of herbal leys.

With a full day of theory and practical on this subject, the group understood the value of herbal leys for improving soil health and fertility, as well as boosting liveweight gain in sheep and cattle.

Mr Brunyee said: "It’s not surprising that they took great interest in the herbal ley day, discussing how deep rooting plants can be used in dry climates.

"We were happy to offer a friendly learning environment, hopefully giving them the confidence to make on farm changes in their respective countries.”

After two days in Oxfordshire, NSA took the group cross county to Shropshire to attend the Down to Earth regenerative event, allowing engagement with UK farmers and businesses.

With a wide variety of speakers from different livestock sectors, the farmers were also able to select sessions appropriate to their personal and professional interests.

NSA chief executive Phil Stocker said: “With my background in organic farming world, I was keen to engage with the study group at Down to Earth.

"Some were old acquaintances from NSA’s past involvement in the iSAGE project, but many were new to both the UK and NSA.

"At a time where farmers are battling weather extremes alongside sustainability challenges, learning from those already affected by long hot summers, periods of extreme drought and flash floods can only be of benefit. Adapting will be critical in these uncertain times.”

On Thursday, the group joined NSA Central Region members for a farm tour of the prestigious Bamford estate, part of JCB farms owned by Lord and Lady Bamford.

He said: "With numerous challenges being faced by UK farmers, it’s not surprising that enterprise stacking, the idea of creating more opportunities from one piece of farmland, is becoming more popular.

"Bamford estate is a great example of diversity, running organic sheep, cattle, deer and poultry and then processing onsite to supply their farm shops and larger retailers. "

There, more than 8,000 people across the world have invested, enabling siblings Charlotte and Ben Hollins to save their family farm from commercial development.