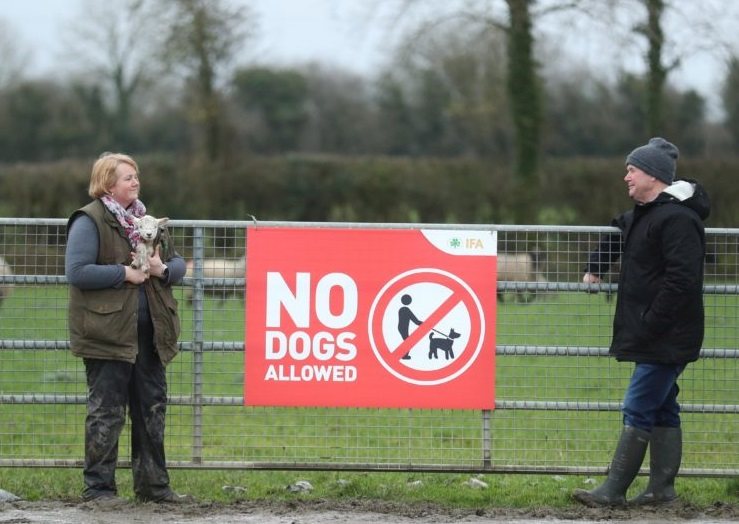 Ireland, like the UK, has seen a significant increase in attacks in recent months (Photo: Irish Farmers Association)

Irish farmers have taken matters into their own hands by refusing land access to dog walkers following a string of horrific attacks on sheep in the country.

As part of a new nationwide campaign, farmers will be putting up 'No Dogs Allowed' posters on farm gates across the Republic of Ireland.

Authorities have been blamed for failing to put appropriate sanctions in place to punish the behaviour of some dog owners.

The Irish Farmers Association (IFA), which is spearheading the campaign, said farmers had no choice but to refuse walkers with dogs.

IFA National Sheep Chairman Sean Dennehy said: “Rather than risk the devastating consequences, farmers will refuse entry to the public with dogs to our lands to protect their animals and their livelihoods.

"A growing number of reckless dog owners have brought this on everybody else, and the inaction of authorities has forced farmers down this route.”

Despite repeated requests, he said local authorities had failed to put appropriate measures in place, and dog owners refused to take responsibility for their pets.

“Farmers are sick of the casual approach of some dog owners who will not accept the damage their pets can inflict on sheep,” he added.

The injuries inflicted on sheep by dogs can be horrific, and often those not killed have to be put down due to the extent of their injuries.

Farmers can also be left mentally traumatised by such incidents, and left financially affected.

Mr Dennehy said there must be a national ownership database for all dogs that allowed those responsible to be identified.

He said the Irish government should also put in place appropriate sanctions to act as a deterrent for those who allow their animals to cause devastation.

The UK is facing similar problems of its own: the cost of dog attacks on livestock increased by over 10% to £1.3 million last year.

A survey by NFU Mutual in January 2021 revealed that 64% of owners were letting their pets roam free in the countryside, with half of those saying their dog did not always come back when called.

It showed that 42% of owners had been walking their pets more often in the countryside during the pandemic, and that 81% had noticed more people exercising their dogs in rural areas.