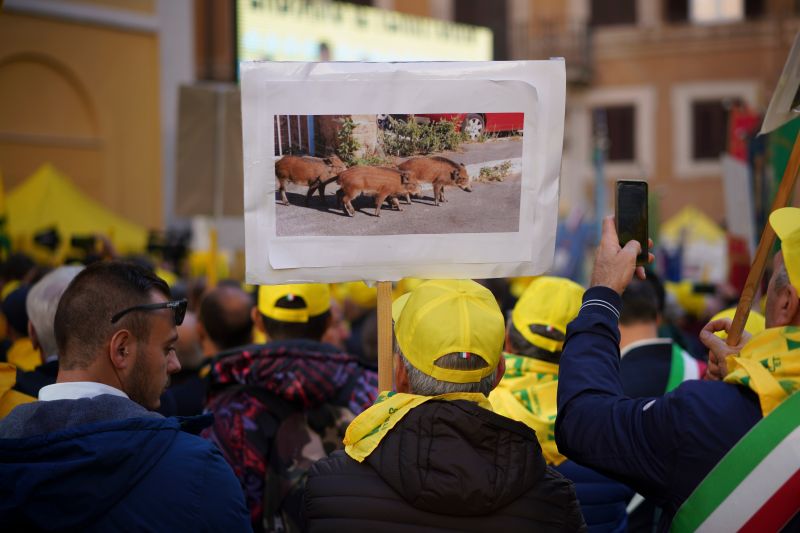 Demonstrators hold a photo showing wild boars walking in a street as they take part in a protest against the overpopulation of wild boars (Photo: Andrew Medichini/AP/Shutterstock)

Hundreds of Italian farmers have gathered in Rome to protest against the increasing number of wild boar in the country.

Industry bodies highlight the animal's population has increased dramatically, and many fear this is having a negative effect on land, livestock and crops.

It is estimated that Italy is home to two million boars, which is double the number ten years ago.

Around 1,000 farmers from across the country protested in the capital, with many saying they faced a 'national emergency'.

It is the first such protest to be held outside the Italian parliament.

Alberto Vincenzo Pagani, the mayor of Binago, a small town in Lombardy, said the situation is 'out of control'.

“They are free to move around as they wish. Boar don’t go into offices or factories, so the only ones penalised by this freedom are farmers.”

Farmers have now called for new measures to cull boars and for the creation of a management plan.

“I like baby wild boars too, but the problem is in the numbers. Nature needs balance.”

During the protest, bowls of wild boar stew and meat sandwiches were handed out by campaigners.

Coldiretti, Italy's farming industry group, said: “The presence of wild boars in population centres and on roads is now a real risk for the safety of citizens.”

The latest population survey puts the number of boar in the forest’s ‘core area’ at around 2,000, a number which the group says is 'way above levels considered to be sustainable'.

Failure to control feral wild boar is 'storing up potential problems' for the pig sector as part of its efforts in keeping African swine fever (ASF) out of the UK pig herd.