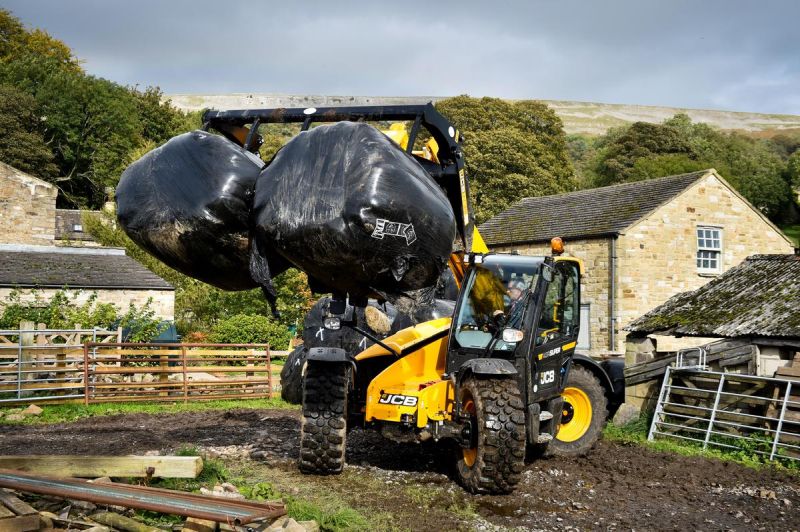 An agricultural charity has been backed by machinery giant JCB by providing practical support for family farms affected by flooding in the Yorkshire Dales.

Since then, charity Forage Aid has been coordinating donations of straw and silage ready for shipments to begin from the end of October.

But while making preparations to collect, transport and distribute the many donations offered, the charity felt the farming families worst affected by the event needed help in clearing up the aftermath of the floods.

Forage Aid Chairman Andrew Ward said: “Unlike previous exceptional weather events, this time there was no immediate need for replacement straw and forage because livestock were still outside grazing.

“But when we visited affected farms, we found piles of silage bales contaminated with sewage from a burst pipe at the sewage works and domestic heating oil spilled from tanks pulled from their positions when the river burst its banks and flooded Reeth.

“We recognised that these heaps of stinking bales in field corners and farmyards were a very unpleasant reminder of the shocking event and farmers just didn’t know what to do with them.”

However, a practical solution was found – the damaged bales would be collected and transported to a farm-based anaerobic digestion plant in Cumbria to contribute to the electricity generated there.

JCB supported the initiative by donating the use of two Fastrac 4220 tractors and a new-generation Loadall 542-70 AGRI Super telescopic handler for more than a fortnight.

Mr Ward said: “We did a trial run with a lorry but tight access to the small Dales farms meant tractors and trailers were a more practical solution.

“The Fastrac’s 60kph legal road speed over the 60-mile round trip meant each one could manage two loads a day – the same as the lorry but carrying more on each run.”

Bailey Trailers pitched in with the loan of two 20 tonne capacity root crop trailers, and 3,000-litres of diesel for the clean-up operation was paid for by Woldmarsh, the national farmers buying group, and domestic and commercial fuel supplier Certas Energy.

Mr Ward said: “Each of these extreme weather events brings something different – and for me, seeing the damage and the sight of dead sheep washed into the lower branches of trees brought home how distressing it must have been for the farming families that were worst affected.”