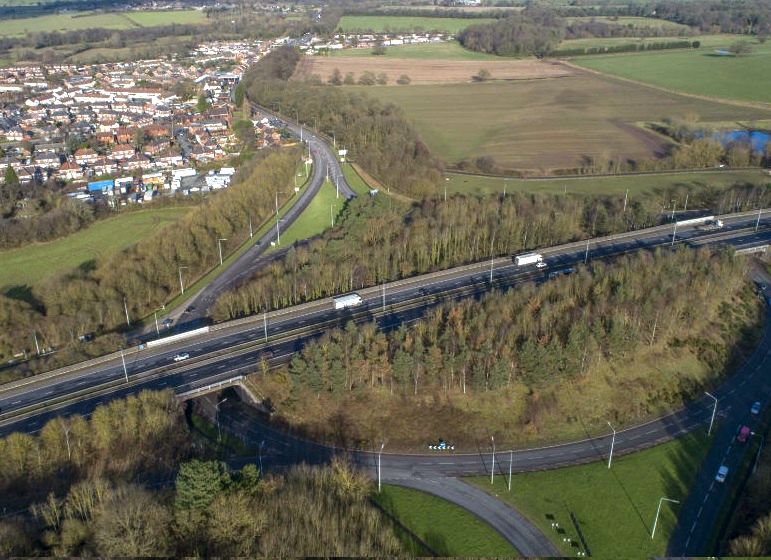 The government identified the need for the proposed direct link road in its 2014 Road Investment Strategy (Photo: Highways England)

Farmers and landowners affected by plans for a direct link road from the M54 to the M6 north are being urged to take action now.

Highways England is expected to make an application to the Planning Inspectorate in 2020 for a Development Consent Order (DCO) under the Planning Act 2008.

The proposal is for the construction of a motorway link road across countryside in south Staffordshire to reduce the amount of traffic currently using local routes.

Those affected by the proposal should be compensated for any surveys and ground investigations being carried out, rural property consultancy Strutt & Parker says.

Adam Jaeban, associate director and valuation expert at the firm, said: “Affected landowners are advised to seek professional advice as soon as possible, to establish the extent to which the plans will affect their property.

“This sort of research can be really important to put landowners in the best possible position when negotiating potential claims for compensation.

“If awarded a DCO, the developer will be given the powers to acquire permanent and temporary interests in the land needed to construct the proposed road.”

This means land will be needed for compounds, working areas, earthworks, ecology sites, balancing ponds, as well as the road itself, Mr Jaeban said.

He added that it is also worth noting that schemes of this nature involve extensive environmental surveys.

These include ecological assessments, noise monitoring and ground investigations, as part of any application to the Planning Inspectorate.

“So it is important that satisfactory terms are agreed with the surveyors for these, so that landowners are properly compensated and indemnified when allowing third-party access over their land,” he said.

Some property owners could serve a blight notice on Highways England, which, if successful, would mean it has to buy the property ahead of construction at market value.

It also means additional loss payments to the homeowner and reasonable disturbance costs, such as removals and legal fees.

Mr Jaeban said: “Others with land required for the proposed scheme, but not wishing to dispose of their whole property, will benefit from advice on typical claim terms, which will include the capital value of the land taken, along with the reduction in value of any retained land and compensation for disturbance as a result of construction.”