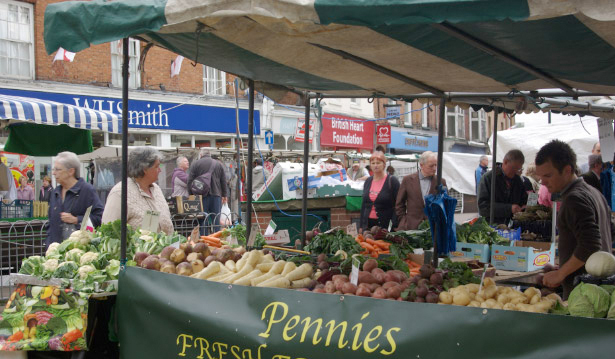 Despite the importance to the high streets and landscapes, local food markets are 'under-recognised' and poorly supported, a new report says.

The report is the culmination of a 5-year research project ‘Mapping Local Food Webs,’ supported by the Big Lottery Fund.

"But we have also found that the rise of out-of-town supermarkets and insufficient leadership from Government over many years have left many local food webs under siege. Action must be taken to support them, and revitalise our high streets and local economies."

The full report, 'From Field to Fork', is available in the FarmingUK Knowledge Centre via http://www.farminguk.com/KnowledgeCentre/From-Field-to-Fork_180.html.

Additionally, the local food maps generated by the research can be accessed from http://www.farminguk.com/KnowledgeCentre/Local-Food-Maps_182.html

The report 'From field to fork: The value of England’s local food webs', found that across England local food outlets serve an estimated 16.3 million customers a week and that local food sales through independent outlets are worth £2.7 billion a year to the economy.

These food outlets support over 100,000 jobs (FT and PT), of which over 61,000 are attributable directly to local food sales.

CRPE gathered a number of case studies that show the contribution local food can make to local communities" http://www.farminguk.com/KnowledgeCentre/CPRE-Case-Studies_183.html

"Local food webs are essential to the character and attractiveness of towns and countryside across England. With around 50p in every £1 we spend in shops spent on food, it is a tremendous opportunity for businesses, from farms to retailers of all sizes, to engage shoppers in making a difference to the quality of their local area" said Graeme Willis.

The research looked at 19 locations across England and identified over 2,500 local food businesses (800+ outlets and 1700+ producers).

The CPRE report shows how local food webs support diversity, distinctiveness and innovation in the food and farming sectors, broaden choice for shoppers, promote seasonality, reduce food miles and shape the character of towns and countryside.

But these local food webs are under threat. The large weekly supermarket shop has increasingly displaced food from marketplaces and town centres and weakened or closed vital outlets for local food. Notwithstanding the value of local food, CPRE found that national supermarket chains dominated grocery spending, accounting for 77 per cent of all main shopping trips in the locations studied.

As supermarket chains have expanded their share of the market, their stores have grown in size and have moved out of town: from just under 300 superstores and hypermarkets in 1980 to 1,500 by 2007.

The number is still growing. By late 2011, applications had been submitted or permission granted for a reported 44 million square feet of new supermarket development, equivalent to 572 football fields, 80 per cent of it out-of-town.

This growth has weakened town centres and the rich variety of food stores that supported them as shopping destinations.

There has been a collapse in traditional specialist food stores, such as butchers and greengrocers, from around 120,000 in the 1950s to 18,000 in the late 2000s. Town centre vacancy rates now average 14 per cent and can be as high as 30 per cent.

The effect on jobs can be severe: in 1998 the National Retail Planning Forum examined the effects on employment following the opening of 93 edge-of-town supermarkets and found a net average loss of 276 jobs in each area.

CPRE’s research found that, more than any other factor, the presence of large food stores, particularly out of town, and the absence of smaller independent outlets, are the decisive factors in the strength of any local food web. The charity will be making a new toolkit available for local campaigners to explore the benefits of and challenges their local food web faces, including the impact of new superstores. The first group to do this has already started in Bishop’s Waltham, Hampshire.

"Our research shows that the presence of supermarkets is not an insurmountable obstacle to vibrant local food networks – but their number, scale and location is critical. Moderately sized supermarkets, well- located and well-connected with town centres, can draw shoppers and support a centre’s overall vibrancy and attractiveness. However, if local food networks are to thrive, they need sustained support from individuals, the community, business and policy-makers locally and nationally" said Graeme Willis.