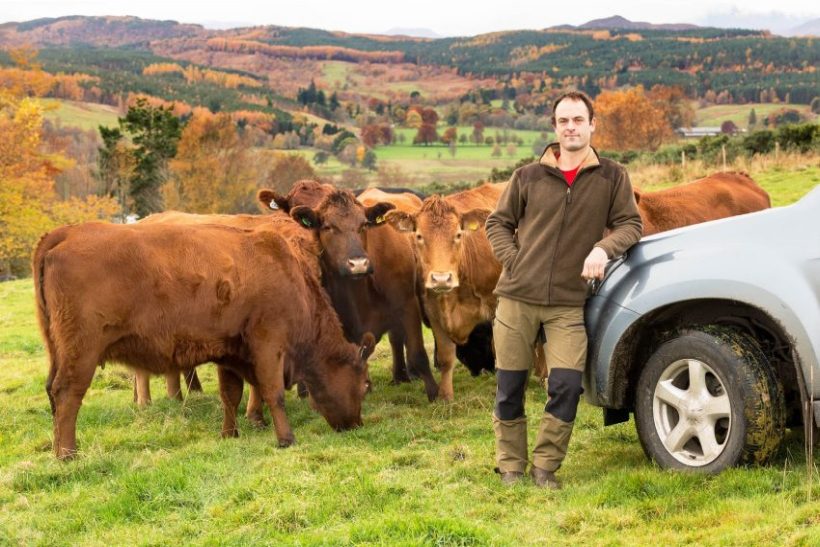 A rotational grazing trial has led one farmer to develop a system which utilises all 600-acres of in-bye and improves pasture on his 8,000-acre hill unit.

With the majority of Corrimony farm, Glenurquhart near Inverness covering rough pasture, David Girvan has made the most of the in-bye grass and forage crops to help cut costs and boost outputs from his 1,000 Lleyn and Highlander cross breeding ewes and 150 Stabiliser suckler cows.

Prior to rotationally grazing, ewes were heavily set stocked on in-bye land during the winter which Mr Girvan states had a knock-on effect on grass growth in spring.

“I previously put poor-quality pasture growth down to our location and climate, but once we started rotating stock in winter and resting paddocks from the turn of the year, swards started to develop two to three weeks earlier.”

Mr Girvan, who was part of Quality Meat Scotland's (QMS) Graze+ project, has since signed up alongside eight other farmers to be part of the GrassCheckGB programme – which aims to look at new grassland technologies and techniques.

He said: “I decided to get involved with GrassCheckGB to help improve my weakness when it came to measuring grass. I would occasionally measure some of the paddocks but wasn’t making best use of practice.

“The programme has given me a bigger incentive to measure grass accurately and has allowed me to expand my network with farmers across the UK, reporting on the factors that influence pasture growth and quality, combined with measures of animal performance.

“I’ve seen the biggest impact by rotationally grazing the ewes through autumn and early winter. Grass is now recovering quicker, resulting in more availability as we head into spring.”

Lambing now commences 10-14 days earlier from the middle of April, with ewes set stocked a few days before lambing.

Once the lambs are old enough, he reintroduces ewes with their offspring onto rotations of approximately 2-5 acres blocks.

The breeding cattle at Corrimony spend most of their time set stocked on the hill in winter and calve outside from early April.

“We are a multiplier farm for the Stabiliser Cattle Company and sell a small number of bulls for breeding as well as yearling heifers,” said Mr Girvan.

“Any bull calves not being sold for breeding are castrated and all youngstock are run together initially, entering a rotation of one to two day shifts on 2-5-acre paddocks.

“The smaller of the youngstock are sold store each year with all heavier stock kept and finished off grass between 16-20 months of age at 600kg.”

As well as utilising grass, he has also introduced a new forage crop to the system, with ewes wintered on fodder beet from mid-December until a few weeks before lambing.

“Prior to introducing fodder beet three years ago, we wintered the ewes on swedes but found they struggled to clean the crop up," he explained.

"Although it’s slightly more expensive to grow, we’ve found fodder beet has been a great success, with the ewes leaving the fields much cleaner and utilising the crop later in the season.”

Mr Girvan concludes: “Rotational grazing and forage crops gives you flexibility. If you can utilise grass stocks into the back end, as well as allowing your leys to rest, it can help cheapen your winter and encourage earlier grass growth in the spring, which is key for us to help aid the health and performance of ewes going into lambing.”