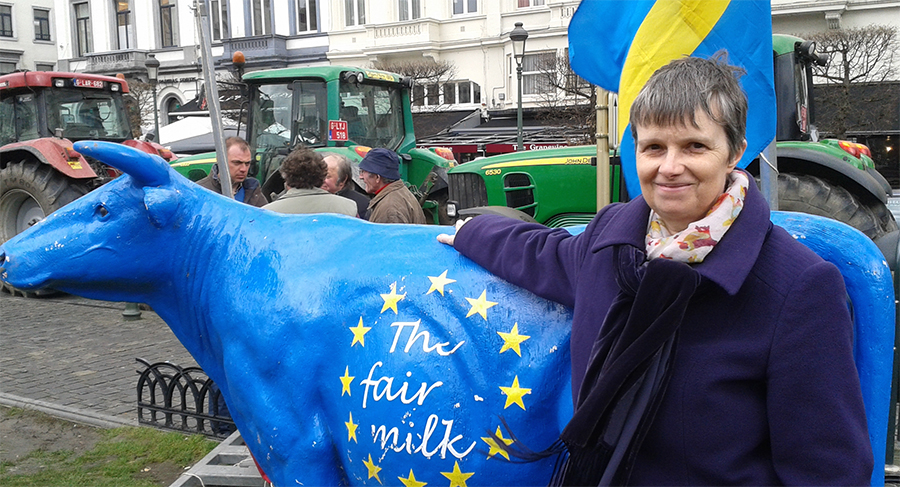 Molly Scott Cato MEP joining a demonstration in front of the European Parliament organised by the European Milk Board (EMB) to protest at weaknesses in the follow-up to the ending of the milk quota system.

The rise of mega-dairies will be the inevitable consequence of the fall in milk prices, according to the Green Party.

South West MEP, Molly Scott Cato, has warned that a combination of factors, including price wars, trade agreements and the ending of the European milk quota, threaten to send traditional small-scale dairy farmers to the wall and will usher in an era of milk and dairy products from giant dairies based outside the South West region and even outside the UK.

Dr Scott Cato is particularly critical of supermarket chains that are engaged in price wars and refuse to pay enough to cover the cost of milk production.

She said: “Some supermarkets are using arguments about the global market to embark on a race to the bottom in terms of pricing. This is an abdication of responsibility towards a crucial sector in the rural economy of the South West and other parts of the UK.

"It appears these giant retailers are quite content to source their future milk supplies from mega-dairies based outside the UK, once they have played their part in driving smaller UK dairy farms to the wall. Many dairy farmers in the South West will have no choice but to quit, which will have a devastating impact on the regional economy and on local jobs.”

Earlier this year, Molly Scott Cato joined other Greens in the European Parliament in criticising the EU for ending the milk quota system without establishing an adequate alternative.

Dr Scott Cato warned at the time that ending the milk quota could increase the vulnerability of small scale dairy farmers in the South West.

She has also been a vociferous opponent of the EU-US Transatlantic Trade and Investment Partnership (TTIP) trade deal, which she has warned will lower agricultural standards. She said:

“Greens warned that ending the milk quota system without an adequate replacement mechanism would lead to further industrialisation of the dairy sector. The downward pressure on milk prices is likely to lead to exactly that outcome. Farms will be compelled to expand to compete or close down. Equally, TTIP threatens to harmonise standards with US food producers.

"This will mean that higher European agricultural standards in terms of human and animal health and welfare and environmental standards will be jeopardised in order to compete on price with the US. Trashing our hard-fought-for regulations and driving small scale dairy producers to the wall simply to gain a litre of milk a few pence cheaper must not be allowed to happen.”