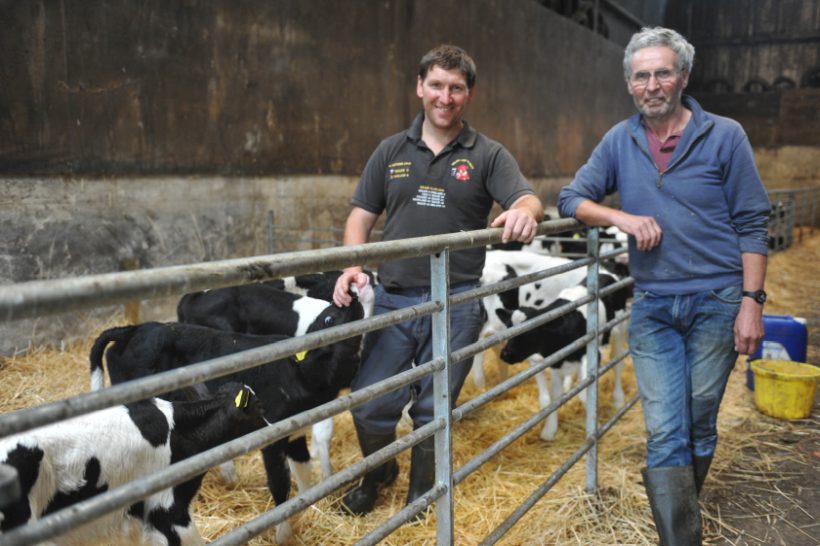 A new entrant who has started dairy farming thanks to a landowner says the opportunity could be a stepping stone to one day buying his own holding.

The pair came together when Arfon was earning his living by milking on three dairy farms and David was scaling back his commitments at his farm Tanycoed, Carmarthenshire.

He was on the point of dispersing his milking herd: “Arfon had heard that the cows were being advertised for sale and he turned up on the yard one day, asking if he could buy the cows and rent the land," David said.

“I thought it could work as I knew Arfon and I have never been afraid to take a chance."

To help inform the process, he gained advice as part of the Farming Connect Venture programme, a matchmaking service that pairs up new entrants with landowners who are looking to step back from the industry.

David and Arfon each secured £1,500 funding for business planning, and they started a year’s trial in October 2018 and established a five-year FBT in 2019.

Now, nearly a year on, it is providing what both parties had hoped for.

David has more free time to devote to his volunteering work, including at rural charity Tir Dewi, while Arfon has more than doubled the land area he now farms to 400 acres

As a farmer’s son, Arfon had always hoped to one day farm in his own right and now he is doing so in the area where he has always lived and worked.

He is already putting his own stamp on the farm, establishing a paddock-grazing system to maximise the volume of milk the autumn calving herd produces from grass.

Cows are mostly at grass from 1 March to mid-October if weather conditions allow, with calving getting underway on 1 August.

He continues to run the farm on an organic system, supplying the milk to OMSCo.

Arfon has taken the opportunity to rent more land as cow numbers have grown and, in addition to the dairy enterprise, he is rearing and finishing British Blue beef calves from the dairy herd.

David had been farming at Tanycoed for 18 years. He started farming on a Hereford and Worcester County Council smallholding before moving to west Wales 27 years ago.

Now aged 62, he said it was the right time to step back from the day-to-day demands of dairy farming. He has four children but all have careers in other industries.

“A lot of farmers reach a certain age and don’t know what to do with the farm. Farming has been very good to me and I thought why not give the opportunity to someone else who wants to have a go," said David.

There was just one proviso when he offered that opportunity to Arfon: “I wanted to milk once a day for the first year."

Naturally, the offer of an extra pair of hands to help with the milking was a condition that Arfon was only too happy to oblige.

David does the morning milking which frees Arfon up to do other jobs on the farm.

The pair say the support they received through Venture helped to simplify the process of establishing the new agreement.

“The financial assistance we received for the business plan was very welcome," said Arfon.

He is optimistic about the future of dairy farming and David has confidence that he will succeed in the industry, to the point where he loaned Arfon money to buy his cows.

At the end of the five-year FBT, there may even be an opportunity to take their agreement to the next level, he says – if Arfon accrues sufficient capital, he may be offered the chance to buy the farm.