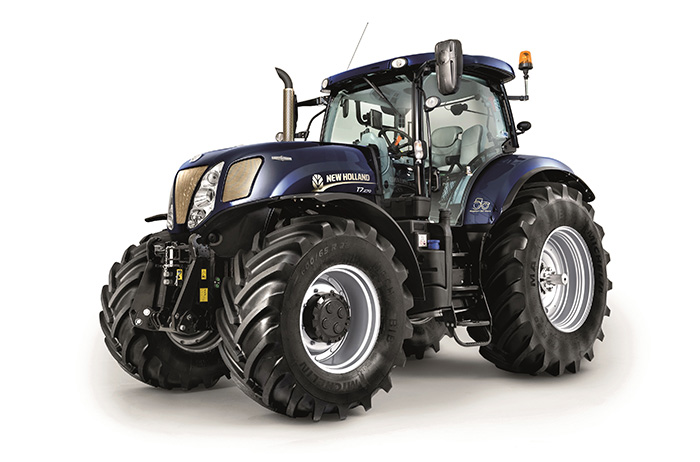 New Holland’s Basildon plant will celebrate half a century of continuous tractor operations in 2014. Exclusive Golden Jubilee editions of the T7.270 Auto Command and T6.160 Auto Command will be produced and a range of celebratory events will take place throughout the year.

These tractors were unveiled at the LAMMA Show for the first time. They will only be built during the Jubilee year, limiting their number to create two future Basildon icons.

In addition to these two celebratory tractors, all models produced in Basildon in 2014 will feature a special 50th anniversary decal, which recalls the elegant lines of the T6 and T7 tractor ranges.

“The New Holland plant at Basildon has been at the centre of our tractor operations for 50 years. Today it produces tractors in the 120 – 270hp range, which are helping farmers and contractors across the globe to farm in an ever more productive, sustainable and efficient manner.” Stated Carlo Lambro, Brand President of New Holland Agriculture.

He added: “These exclusive Golden Jubilee editions celebrate the unparalleled success of both the T7.270 Auto Command and the T6.160 Auto Command. The special events will also provide us with the opportunity to say thank you to the generations of colleagues who have contributed to New Holland’s success.”

Half a century of making tractor history

The construction of a purpose built factory for the fully integrated production of tractors began in 1962, and the 15th May 1964 saw the very first tractors go down the production line of Europe’s most modern tractor manufacturing facility. A quarter of a century later, in 1989, over two million engines had been produced and the now iconic Ford 7810 Silver Jubilee model was launched to commemorate this important milestone. Another key year for Basildon was the unveiling of the state-of-the-art visitors’ centre in 2012, the same year the plant achieved Bronze World Class Manufacturing status and the UK Prime Minister, David Cameron, visited the factory.

Since 1964 over 1.6 million tractors and 3.1 million engines have been produced at Basildon. Today the plant employs more than one thousand people dedicated to producing industry-leading tractors. The facility can accommodate more than 10,000 different product specifications and 85% of total production is exported across the globe.

Basildon’s tractors themselves have shaped modern agricultural history, dating back to the first Ford 1000 series models of the mid-1960s. They ushered in the era of modern agriculture, and they were completely new from the ground up: new engines and transmissions ensured this range was an instant hit across the globe. The Ford 40 series were ground-breaking models in the early 1990s. They featured the renowned PowerStar engines, also built at Basildon. These tractors improved farming comfort, thanks to the SuperLux cab, which offered a quiet, roomy operating space, advanced closed centre load sensing hydraulics and the forerunner of the Electro Command™ semi-powershift transmission, the ElectroShift. Following the impressive UK and European launch, sales of this 75-120hp range reached the 100,000 unit mark.

The TS series was launched in the late 1990s and was an evolution of the 40 series. This range was the first to feature New Holland’s distinctive styling, characterised by the sloping hood. It was also the very first range to benefit from Tier 1 emissions technology: signalling the start of New Holland’s unswerving commitment to reducing the environmental impact of farming. The TM range, developing between 120-190hp, became synonymous with excellent performance and outstanding ease of use thanks to the introduction of Terraglide™ front axle suspension. It was also the first range to benefit from productivity enhancing Engine Power Management technology.

Basildon tractors have always been at the cutting edge of transmission technology. The T7000 range boasted the best powershift in its segment, in the form of the Power Command™ transmission. Multi-award winning Auto Command™, continuously variable transmission, technology came to Basildon in 2009 on T7000 series, as did the benchmark ergonomic SideWinder™ II armrest.

The plant’s latest ranges, the T6 and T7 are continuing this productive, efficient and sustainable heritage. They are equipped with state-of-the-art ECOBlue™ SCR technology to meet the latest emission regulations, which has reduced fuel consumption by up to 10% whilst simultaneously improving productivity.