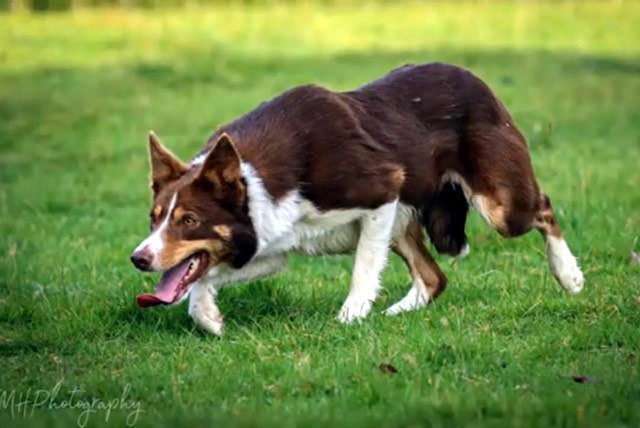 The world record price for a working sheep dog at an official sale has been smashed at Skipton Auction Mart - reaching a new high of £20,000.

Top Welsh breeder and triallist Kevin Evans, of Llwynfedwen Farm, near Brecon in Powys, established the highest price ever paid for a dog at an official sale, with his a tri-coloured bitch Henna, who will turn four next month.

It eclipsed the previous world record price of £19,451 for a bitch sold earlier this year at a virtual sale in Wales – and by Kevin’s father no less, Brecon triallist David Evans.

This pipped the former world record price of £18,900 established at Skipton in February - the last live dog sale before lockdown – by another bitch from Northumberland shepherdess Emma Gray.

Fully broken and already described as a class act with many trials placings, Henna is a daughter of Mr Evans’ own Moss, a red dog that won a couple of nursery trials before being sold privately to Norway a few years back.

The dam is fellow Welsh breeder Ian Fowler’s Fran, whose own father was Mr Evans’ old Jaff, a dog that won multiple trials at the highest level and also successfully represented the Welsh national team on several occasions.

She first viewed online footage of the dog being put though her paces, then made the half hour trip to Kevin’s farm on the final morning of the sale to work Henna herself, before joining the online bidding frenzy for the top-notch prospect.

“I had to press the online bidding button many times as the price rose and rose in order to get her,” said Mrs Jones.

“However, Henna reminded me so much of my old home-bred bitch, Tikka, being exactly the same colour. She is the spitting image, so I just had to have her.”

Mrs Jones farms on her husband and father-in-law’s farm at Llanbedr, Crickhowell, and Henna will be put to work on the family’s two sheep flocks comprising 500 Suffolk-cross ewes and 250 Welsh Mountain ewes, as well as store cattle.

Born and bred in Cwmdu, which stands at the heart of the Black Mountains, the new owner of the world’s most expensive working sheep dog has a lifelong love of the breed, both working and breeding them ever since being a child growing up on the family farm run by her parents, Mr and Mrs Greenhow.

In years gone by, Mrs Jones used to trial sheep dogs locally and says she has aspirations to return to the trials field now that her three children – Bethan, Ryan, and Megan – are fast growing up.

Two other new world record prices were set at Skipton Auction Mart's virtual auction sale - £4,200 for an eight-month-old part-broken bitch and £3,700 for an unbroken five-month-old pup.