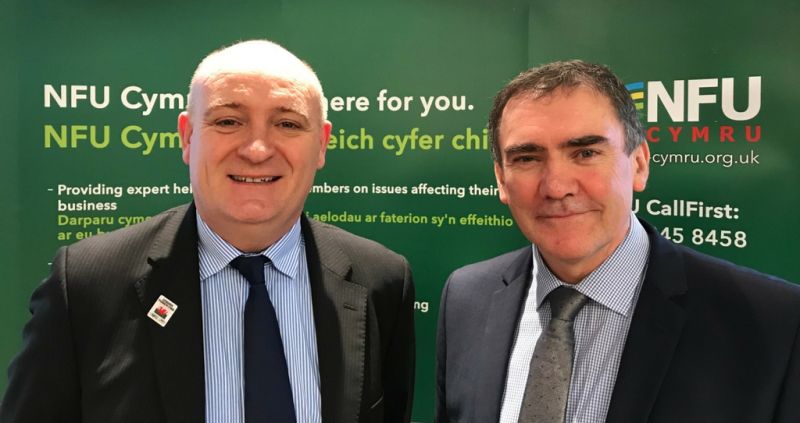 NFU Cymru president John Davies and deputy president Aled Jones have been re-elected to their roles for a further two years.

Davies, a beef and sheep farmer from Powys, and Jones, a dairy farmer from Mid Gwynedd, were unanimously re-elected to their positions.

John Davies said: “There can be little doubt that it has been an eventful last two years for our industry, but I have taken great pride in fighting for Wales’ farmers during every day of my tenure.

“I am under no illusions that huge challenges still face Welsh farming, but I remain committed to lobbying politicians in Cardiff Bay, Westminster and Brussels on the issues that matter to our members – not least bovine TB, water quality and future trade.

“But we also need to be positive and seize the opportunities that come our way. I firmly believe that climate change presents a real opportunity for Welsh farmers to rise to the challenge and become the most climate-friendly food producers in the world.”

Aled Jones said: “It has been a privilege to serve the NFU Cymru membership over the past two years. One of the most enjoyable elements of my work has been travelling across Wales meeting farmers and hearing the issues that are affecting their businesses and their families.

“I pledge to continue my work over the next two years voicing the concerns and issues raised by our members with politicians, stakeholders, broadcasters and retailers.”