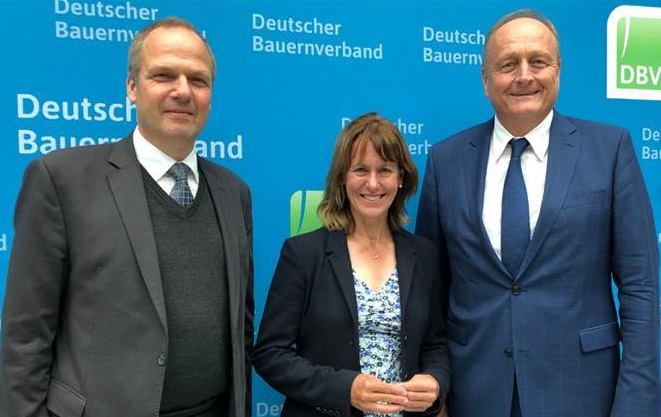 The NFU president has met with her German counterpart to discuss pressing matters facing both British and European agriculture.

Elected in 2012 Mr Rukwied is a grain, sugar beet, vegetable and wine producer from Baden Wuerttemberg in Germany. He is also President of the European Farmers’ Association, Copa.

They discussed upcoming priority issues for the industry in both the UK and Europe, mainly Brexit and climate change.

Both unions have consistently told governments in the UK and Germany that farmers need a political and trading environment that allows them to 'thrive'.

They said it is 'crucial' that free and frictionless trade is maintained with the UK and its European partners after Brexit.

The two presidents said in a joint statement: “We therefore need to avoid a no deal Brexit and for the UK to leave the EU in a smooth and orderly manner that enables our industries to continue to be productive, profitable and progressive.

“We will continue to ensure that politicians and policy makers understand the importance of a strong farming industry.

“We are proud that our members deliver for the public on food safety, quality and sustainability. Our standards of production are among the best in the world and must not be undermined by trade deals.”

Both unions said they are 'committed' to improving farming’s productive ef­ficiency, improving land management and changing land use to capture more carbon and boosting renewable energy.

“Every farmer across Europe has a unique role to play, some large, some small, but all must play their part to make Europe the home of climate-friendly food,” both presidents said.