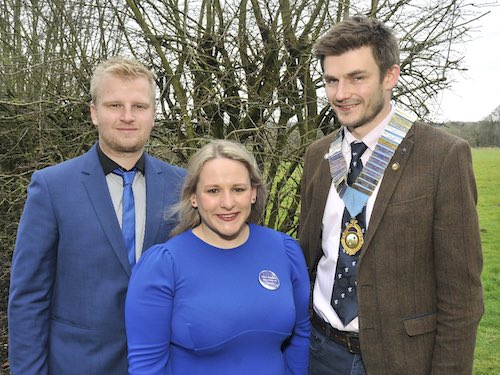 Edward Dungait (R), an arable farmer from Morpeth, has been a member of Tritlington YFC for 12 years

A young farmer from Northumberland will lead the National Federation of Young Farmers’ Clubs’ (NFYFC) in its 90th year after being chair of council.

Edward Dungait, an arable farmer from Morpeth, has been a member of Tritlington Young Farmers’ Club (YFC) for 12 years and will now lead the national Council during its historic year.

The 28-year-old, who has been the Vice Chair of Council for the past two years, was elected on Sunday 20 February during an NFYFC Council meeting in Warwickshire.

He will be supported by Vice Chair Rosie Bennett from Devon and Drew Bailey from Derbyshire who were also elected at the meeting.

After two years of restrictions, with many YFC events being cancelled or moved online, Edward says he is looking forward to uniting members from across England and Wales at activities and events.

NFYFC was first formed in June 1932 and Edward is planning a national event to mark the organisation’s 90th year.

It will also be a year of celebration for NFYFC’s Patron The Queen and YFCs across England and Wales will be involved in events, such as the lighting of beacons, to commemorate the Platinum Jubilee.

Edward said: “It’s such an honour to lead the organisation during its 90th year and especially as we come out of the pandemic.

“It has been a challenging few years for Young Farmers’ Clubs – with many unable to meet during the restrictions.

"But we have come back even bigger and better this year, with thousands of rural young people joining the organisation again.

“As Chair of Council, my focus is on uniting YFCs across England and Wales after a period of such uncertainty for everyone.

"Our Competitions programme is already underway, which is all set to be held in person again this year.

“NFYFC Council is made up of a diverse range of members from across England and Wales and I am really looking forward to working with such enthusiastic people who are all committed to driving our organisation forward.”

More than 60 members gathered in Warwickshire and online to pass motions that affect the running of the organisation and elect the new officers of NFYFC’s Council.

The National Council is made up of 63 members, associate members and co-options from across England and Wales and is elected by YFC members to represent their views.