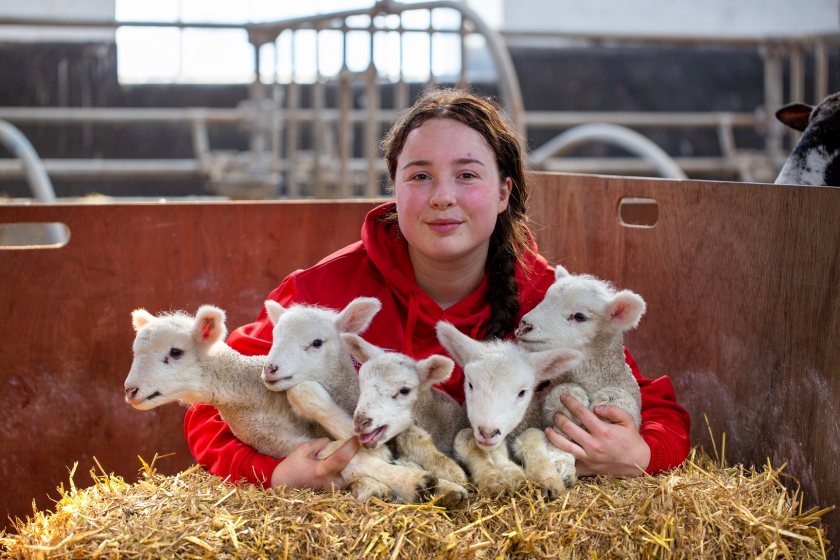 All five lambs weighed about 3.5kg each, Hartpury said

Students at Hartpury are celebrating the birth of 'one-in-a-million' quintuplet lambs born on the college's on-site farm.

One of Hartpury's 650 ewes gave birth to the healthy new arrivals at the institution’s commercial farm, Home Farm.

All five of the new-born lambs weighed around 3 and a half kg each.

“In all my years working in agriculture I’ve never come across a set of quintuplet lambs – it’s very special indeed,” he said.

“Apparently the chances of a ewe giving birth to quintuplets are a million to one, and it’s even rarer for them to be born alive and well.

“When the mother was scanned to check she was healthy and that the pregnancy was all going well, four lambs showed up on the scan.

“That’s rare in itself, because ewes tend to have only triplets at most."

When the time to give birth came and the mother had triplets, staff and students thought the scans had to be wrong.

“We moved the ewe into a separate pen to give her a rest but when we came back 35 minutes later to check on her welfare, there were another two lambs – we were literally counting sheep," he said.

“Three of the lambs are still with their mother and two are with foster mums because she wouldn’t have had enough milk to feed all of them on her own.

“We’re keeping a close eye on them, as we do with all our animals, but they’ve settled in well and are obviously completely unaware of the excitement that their arrival has created.”