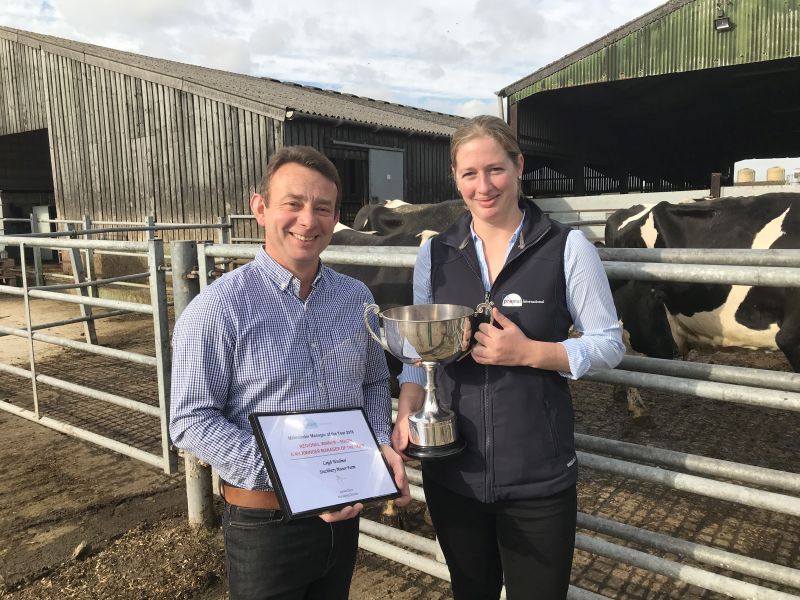 Leigh Woolmer of Stuchbury Manor Farm, Banbury has been named Milkminder Manager of the Year award 2018.

He overcame tough competition to scoop the national title, according to the agri-food consultancy behind the award, Promar.

James Dunn, Promar Managing Director and judge said: “Leigh’s attention to detail has been a big driver in the success and technical performance of the herd, which averages 8,966 litres, with 4% butterfat and 3.2% protein.

Mr Woolmer has achieved consistently good milk quality recordings as a result of a rigid five-point parlour routine implemented on the farm.

“Each cow is pre-sprayed, wiped, and stripped before milking, and sprayed again before leaving the parlour,” he said

Mr Dunn added that the health and welfare of the herd is the key priority for the farm.

“The estate invested in a cubicle system around 18 months ago, replacing the previous open pen system in order to further improve udder health, and the results have been significant.

“The cubicles are cleaned twice a day, and scraped as often as possible, which has seen mastitis cases reduced considerably,” he said.

Around four years ago, the farm was also faced with a significant Neospora outbreak, with nearly half the herd aborting in a year.

Mr Dunn said: “This was a huge blow for both Leigh and the estate, but he has been determined to tackle the issue with a strict breeding policy.

“Milk testing is carried out before drying off, and any cows that have tested positive are put to beef sires, along with any that may have a history in the dam, to prevent any carryover to the next generation of the herd.

“Leigh’s technical performance, meticulous standards and eye for detail are a rare commodity, and it’s great to be able to reward a manager who is focused on making the most of his milk to drive the business forward,” he said.