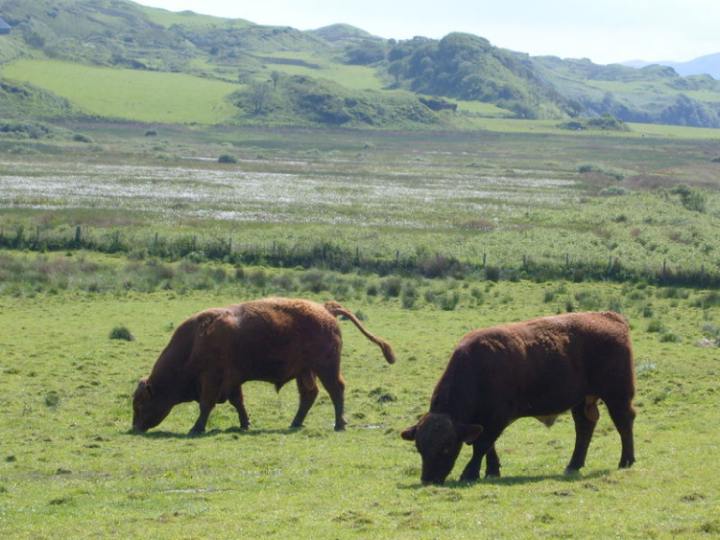 Paddock grazing has helped a farming couple in the Scottish Borders utilise grass growth during a drought.

Since introducing paddock grazing to their organic unit, Giles and Alison Henry have increased stock numbers and grazing potential by 30% across 110ha.

Their system, based at Oakwood Mill near Selkirk, consists of 75 pure Luing cows split into groups of approximately 20.

They have been rotated every three days round 1ha paddocks from 1 April, when they start calving.

Steers which are kept through to finish, along with additional finishers brought in as part of a collaboration venture with fellow organic farmer Charley Walker, follow into the rotation four weeks later, along with the previous year’s calves from Oakwood Mill.

“All stock is kept outside 365 days of the year and during the winter months young stock are strip grazed on kale along with baled silage and the cows on deferred grazing,” said Mr Henry.

The couple are part of the GrassCheckGB programme which aims to improve grassland productivity and pasture utilisation on beef and sheep farms.

This year, in particular, has seen the benefits of grass analysis and pasture efficiency with slow rising soil temperatures in March and April, along with lack of rainfall throughout April and May affecting grass growth.

Mr Henry said: “In 2019, stock were introduced to paddock grazing with grass cover of 2,070kg of dry matter (DM) per hectare, but this year due to a severe lack of rain fall, cover was approximately 1,820kg/DM per hectare.

“By the end of April, we would usually have daily growth rates of around 31kg/DM per day and this year it was only 19.1kg/DM.

As part of the GrassCheckGB programme, the couple measures the grazing platform on a weekly basis through the grazing season and every fortnight submits grass samples for analysis.

“Although I was already measuring grass and utilising paddock grazing, being part of the GrassCheckGB programme has helped me get into a better routine of measuring the paddocks," Mr Henry said.

"It’s a great group, everyone involved is open, honest and willing share knowledge, advice and results.

“The added bonus of receiving a plate meter to help measure grass has been really beneficial, as before I was measuring with a sward stick.”

For the Henrys, measuring grass has been key to him managing stocking rates: “Knowing what we have in front of us has helped make decisions to benefit our system.

"This year we chose to sell 12 cows and calves because the grass growth was limited, and I knew exactly how many kilograms of grass a day my stock needed.”

“May is the month where our grass really grows, and we begin to shut off paddocks for silage. In 2019 our growth was averaging 65kg/day but this year it was down as low as 25kg/day, resulting in us putting two silage paddocks back into grazing for finishing cattle.”

However, despite rainfall being down by a third of what it would usually be for April and May and a slow start to grass growth, the farmers still managed to get their first cut of silage harvested ten days later than normal.

“If we hadn’t been paddock grazing, every field would have been grazed to board by the end of April resulting in a real issue, not only with limited grass for grazing, but a later silage and a poorer crop.”

"I have spent between £7,000 to £8,000 on purchasing electric fencing equipment and installing water troughs, but that was a one-off cost which has allowed me to gain 30% more grazing potential from my ground - one year of renting 30% more land would cost us that annually.

"We are also producing grass at 12.2 ME and 26% protein and do not have to buy in any additional feed, so for me, introducing this kind of system to your enterprise is a no brainer," he said.