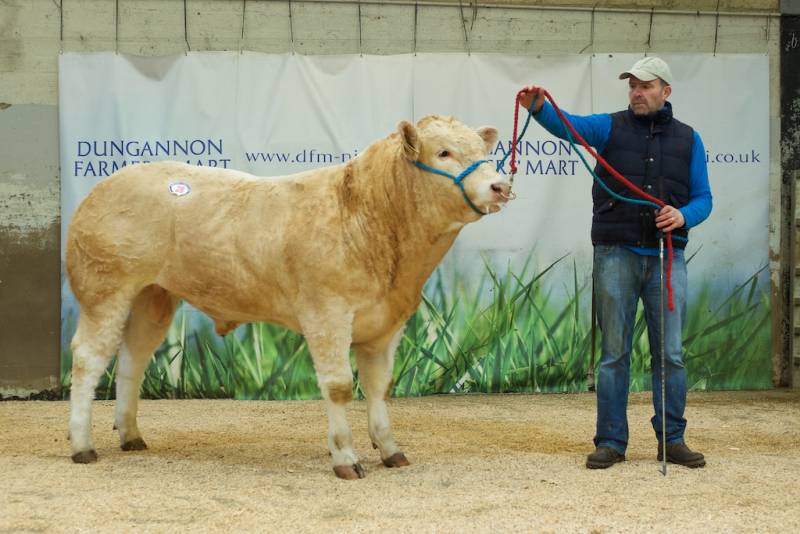 Top price of £3000 was secured by Colin Todd for his sole entry Pinehill Orion, sired by Pinehill Goldenballs

Blonde breeders recorded a 100% clearance of pedigree shown bulls at the autumn show and sale in Dungannon Farmers Mart with a healthy average of £2440.

Top price of £3000 was secured by Colin Todd for his sole entry Pinehill Orion, sired by Pinehill Goldenballs, during the sale on Friday 25 October.

This 15 month old bull weighed in at 650kgs and earlier stood 3rd in the pre sale show, was bought by Brian McGartland of the Drumnafern herd, Dungannon, County Tyrone.

The pre sale judging was in the hands of young breeder Molly Bradley who selected both the champion and reserve champion from the Hillhead herd, owned by the Rodgers family.

Hillhead Officer, sired by Allacott Herbert and weighing in at 830kgs was awarded the supreme championship.

This smart sixteen month old bull was purchased for £2600 by the Johnston family to join their Ballymacan herd in Clogher, County Tyrone.

Reserve champion, Hillhead Obtuse also sired by Herbert was purchased by Mr Kelly from County Down for £2700.

Brian McGartland turned from purchaser to vendor when he sold the 4th placed Drumnafern OJ for £2100 to Dessie Greene of the Scaughmolin herd, who had travelled up from County Wexford.