Plight of the honey bee! 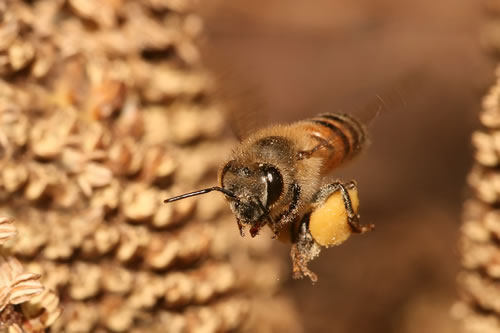 A steep increase in honey bee colony losses has been reported around the globe in recent years. In the United States (US), a phenomenon called ’colony collapse disorder’—first discovered in 2006—has caused inexplicable losses. The rate of bee colonies not surviving the winter ranged between 30 percent and 35 percent on average for the years 2006/2007 to 2009/2010—a loss rate of 10 percent would be considered normal. However, some of the worst-hit beekeepers have reported losses of up to 90 percent. Most countries in Europe have also been experiencing colony losses above 20 percent in the past few years.

What exactly is causing the increased colony losses remains subject to further investigation. However, the academic world now seems to agree that rather than one factor there is a mixture of potentially synergistic causes for the losses. Although problems have been the worst in Europe and the US, inexplicable losses are also being witnessed in Asia, South America and the Middle East.

This increase in bee colony losses has drawn much attention from the media, politicians, the academic world and the general public. Some even paint apocalyptic scenarios whereby mankind could vanish along with the honey bee. But this is unlikely, as some of the major staple crops like rice, wheat and corn do not require animal pollination. Also, high bee colony losses are not entirely new: in the early 20th century, an epidemic known as the Isle of Wight disease wiped out nearly all the bees from the British Isles. Nevertheless, there is some reason for concern. A further decline in honey bee numbers could cause a pollination shortage and subsequently impact yields of pollination-dependent crops like apples, pears and cocoa. In a more extreme scenario, farmers might not be able to grow some crops profitably. Furthermore, the issue—which is now global rather than local - is compounded by world agriculture’s increasing dependence on the honey bee.

Some 90 agricultural crops, representing one-third of global food production volume, are to some extent dependent on animal pollination. The total value is even higher as pollination-dependent crops - like apples, blueberries and coffee - tend to be more valuable than wind-pollinated crops like wheat, rice and corn. There are several pollinating animal species, but the domesticated honey bee is by far the most important one, accounting for an average of 80 percent to 90 percent of total animal pollination.

The impact of pollination varies by crop. For some crops, like almonds or melons, pollination is absolutely essential as poor pollination would cause a failed harvest. For other crops, such as oranges and grapefruit, pollination has a small but valuable impact on the size and quality of the fruit.

In the past 50 years, global production of pollination-dependent crops has grown at an accelerated pace relative to the overall growth in food production. In the past five decades, world food production tripled while the production of our reference basket of pollination-dependent crops nearly quintupled. In other words pollination dependent crops represent a larger proportion of the average diet than they did 50 years ago. This is because rising disposable incomes have encouraged consumers to include more fresh fruits and vegetables in their diets. This trend is expected to continue on the back of rising income levels in emerging giants like China and Brazil, as people continue to diversify their diets and move away from major staple crops like corn, wheat and rice, which do not require animal pollination.

Production growing faster than the number of managed bee hives

Although the global stock of managed bee colonies may be growing, the demand for agricultural pollination is increasing more rapidly2.This is illustrated by our estimate that in the past 50 years the global acreage planted with pollination-dependent crops has increased by 135 percent while the number of managed bee colonies grew by 83 percent. In Europe, among the regions with the highest colony-loss rates, the gap has grown even wider as the acreage requiring pollination doubled while the number of bee colonies only grew by some 50 percent.

However, the US has been identified as a key risk region, as the situation there is much more extreme . Production of pollinated crops has quadrupled since 1961 whereas the number of managed bee colonies has more than halved. The latter development has been driven by cheap honey imports from Asia and beekeeping being an ageing profession. The consequence is that the average number of bee colonies per pollination-requiring hectare has declined by nearly 90 percent. This does not suggest a causality between the decline in bee colonies relative to the demand for agricultural pollination and the colony losses observed in recent years; rather, this development illustrates the growing, inherent risk of colony losses as the average colony is responsible for a greater pollination task.

On the other hand, farmers have managed to grow produce with relatively fewer bee colonies up to this point, and there has been no evidence of agricultural yields being affected by a decline in pollinators. But the question is how much further this situation can be stretched. In the US, there have already been situations in which bee colonies have been imported from Australia to cover a pollination shortage due to high mortality rates of domestic colonies.

Role of managed bee hives more important relative to wild pollinators. In addition to the growth in food production volumes, another reason global agriculture is becoming increasingly dependent on the honey bee is that production methods have changed greatly in the past century. The total global agricultural acreage has not grown nearly as fast as total production. This is because of the

yield improvements that are enabled by the enormous technological advances made in agriculture during the second half of the 20th century.

Part of the advancement in improving agricultural yields is due to the fact that crops are increasingly grown under monoculture. This is also the case for pollination-dependent crops. This has had a double-edged effect on agriculture’s dependence on managed bee colonies. First, the acreage requiring pollination has simply increased, and second, areas under monoculture often require bringing managed bee hives to the field, as areas under monoculture do not usually provide the right living conditions to host wild pollinators that would normally be found in areas with greater biodiversity. Even if a crop field is surrounded by forest, wild pollinators only reach the borders of the field, as their radius is usually much smaller than that of the honey bee, which can cover an area of up to seven kilometres around the hive.

The exact cause for the rapid rate of bee colony losses witnessed in recent years remains unclear. A lot of scientific research has been conducted to uncover the culprit, often leading to contradictory conclusions. But the academic world now seems to agree that there is no single cause to this issue; it is more than likely that a number of causes have together formed a lethal cocktail. Some of the causes may even have synergistic effects, but exactly how they interact is currently subject to investigation.

Honey bees used for human purposes are bred to be friendly, efficient in pollination and able to produce large amounts of honey. This is what could be called commercial selection over natural selection. Bee queens, the only bees in a hive that produce larvae, are bred by a relatively small number of commercial breeders. This inbreeding has caused a huge decline in diversity and thereby a shrinking gene pool, which in turn has affected the specie’s resilience to adverse influences or natural enemies. The best known example is the varroa destructor, a parasitic mite that weakens the bee.

The wider decline in biodiversity also has its effect on the honey bee. Increased monoculture and the coinciding loss of semi-natural habitat have impacted the bees’ diet; the lack of variation has led to malnutrition of managed bee colonies. For the same reason, wild pollinators including wild bees are suffering in many regions. Another suspected cause is pesticide use. This has led to bans on certain pesticides linked to bee colony losses in France and Germany. There seems to be no agreement among stakeholders about the exact role of pesticides; they are the major cause according to some, and are considered less relevant by others. Yet, in Sichuan (Southern China) the application of too much pesticide during the 1980s wiped out many insects, including bees.

Therefore, each spring, pollination in this area is carried out by hand, an enormously labour intensive task considering that a single bee colony can pollinate up to 300million flowers a day.

Most of the suspected factors causing bee colony losses are linked to modern agriculture. At the same time, modern agriculture has provided the world with great benefits. Today, 1.5 times more food per capita is produced than was produced 50 years ago and this food is of greater quality and greater diversity than half a century ago. The achievements of modern agriculture must be maintained. As world population continues to grow, so too will the demand for food. Additionally, the demand for pollination-dependent crops is Considering that this is a global issue and that the inherent economic impact of a further decline of bee colonies may be substantial, the tide must

be turned. This will require increased cooperation between the academic world, governmental bodies, apiarists and companies directly dependent on pollination. The beekeepers, mostly loosely organised in apiarist associations, will not be able to solve the issue themselves.

First, a better understanding of how the suspected causes of colony losses interact and how bees respond to those causes is needed. This will require coordinated research and more close and consistent monitoring of bee colonies, as sufficient quality data is often lacking. In the mean time, to save the genetic diversity currently present among the bees, breeding projects should be developed, with or without governmental support. Furthermore, biodiversity in agricultural areas should be increased to provide greater nutritional variety for the bees pollinating the crops, and to promote the right living conditions for attracting wild pollinating species that could take over part of the pollination job. A practical solution would be introducing a variety of plants between permanent crops or promoting weedy borders. In addition, although the use of pesticides cannot always be avoided, application should take place in cooperation with beekeepers. A simple but effective measure is avoiding pesticide use during daylight hours, when bees are foraging. For those producing pollination-dependent crops, one thing is clear: pollination should not be considered as a production factor to be taken or granted going forward.