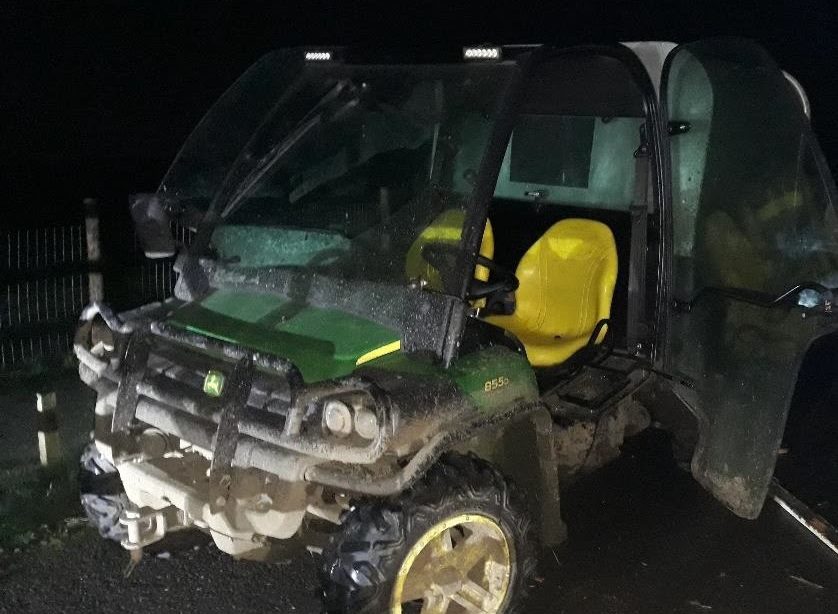 The stolen vehicle was recovered within minutes by police, and the suspect was arrested

Police have given security guidance to farmers after a stolen John Deere Gator was found by officers minutes following its theft from a Yorkshire farm.

Just after 1.50am today (Monday 30 November), North Yorkshire Police received a report that a quad bike had just been stolen from a farm near Northallerton.

The caller reported seeing the John Deere Gator being driven off at speed down their driveway.

Officers responded immediately, and at 2.10am they found the vehicle abandoned just off the A67 at Kirklevington, south of Yarm, with its engine still running.

Knowing that any suspects were likely to be nearby, officers contained the area and began a search.

At 2.30am, they found a man covered in mud, in a bus shelter a few hundred metres away from where the quad was abandoned.

The man, aged 24 and from Stockton-on-Tees, was arrested on suspicion of burglary, vehicle theft and vehicle interference. He remains in custody.

The stolen quad was recovered for forensic analysis, and will then be returned to the farmer.

Inspector Sarah Sanderson, of North Yorkshire Police, said quads were frequently targeted by thieves in rural areas as they are small, expensive and easy to transport.

"Their loss can have a big economic impact on farms and other rural businesses – at a time when farmers can ill-afford any further disruption," she added.

"Instead, they will face an immediate and robust police response to their offending, followed by likely arrest and prosecution."

• Mark or customise your quad so it is easily identifiable, and keep a record, including photographs and serial numbers.