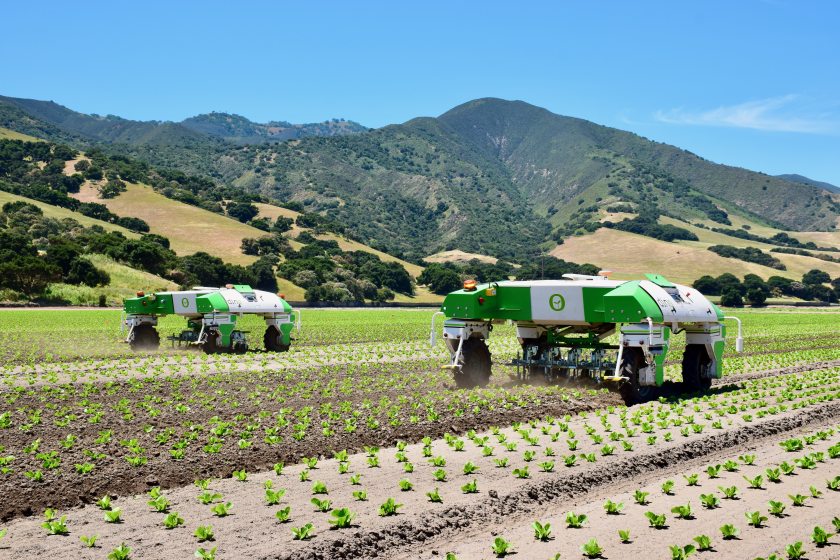 Robotic weeders are in production that use image analysis to selectively target weeds with either mechanical or chemical technology.

The wrong plant in the wrong place has long been one of the greatest thorns in the farmer’s back.

Many weeds have adapted to make the most of short windows of opportunity and develop resistance to herbicides, working to limit a crop’s potential harvest, by competing with it for water, light, and nutrients.

At the same time, key herbicides continue to be removed from permitted use, and farmers face the growing challenge of a scarce, and increasingly more expensive, manual labour force.

However, in recent years AI has advanced to such a level that it can now identify the difference between a plant which is a weed and a plant which is part of the crop, adding a new weapon to the farmer’s armoury.

Robotic weeders come in many different shapes and sizes, some use mechanical hoeing methods, whilst others operate using chemical spot spraying.

This technology was first seen in action in the United States with a company called Blue River Technology.

Back in 2018 they brought a machine into commercial production that passes over row crops and uses computer vision technology to compare an image of every single plant it encounters with an extensive database of images, when an unwanted plant is identified it applies a precise does of herbicide.

Similarly, Danish engineers F. Poulsen have developed a machine called the ‘Robovator’ that uses the same identification technology but removes the weeds with mechanical instruments instead of herbicides.

There are also machines which use thermal weeding tools such as hot oil, pinpoint flames, and even lasers to remove the unwanted plants.

However, both the ‘Robovator’ and Blue River’s technology is pulled over the crop by a tractor, so can they really be classed as true robots?

Certainly, the technology they use is AI, as they are able to make decisions for themselves, but they are not fully automated and still require constant management by an operator.

Instead, they have proven to be steppingstones towards true weeding robotics.

Fully automated weeders do exist. Naïo Technologies are a Toulouse based agtech company that already has more than 200 customers using true weeding robots on farms.

Like the tractor mounted machines, their robots are only designed to work rowed crops, whilst they use a range of adaptable mechanical hoeing tools to remove unwanted plants.

The company makes specialised weeding robots for both market gardens and vineyards, but their ‘Dino’ model is designed for large scale vegetable growers.

The ‘Dino’ navigates using GPS provided by the RTK system that is commonly used by tractor autosteer systems.

This operates in conjunction with a camera guidance system which ensures that the robot stays on the right path and does not weed the wrong area.

The system is straightforward to operate and can be managed from a mobile phone, so the farmer knows exactly where the machine is and what it is doing.

Naïo’s machines use similar tech to other precision weeders: the ‘Dino’ uses 3D cameras to recognise the unique shape that every plant species has by comparing them with thousands of images of crops and weeds from every conceivable angle, accurate to less than 5cm.

The ‘Dino’ is run on electric power and can be charged nightly by being plugged in at the farm.

However, a transportable solar charging station is in development to avoid the farmer having to bring the robot back from the field every day, either on a trailer or the machine’s own wheels.

A single charge will last for around 10 hours and cover a maximum of 4ha in a day.

Naïo said that it has taken time to bring their technology into production because regulation for robots has had to be built up from scratch on both a national and EU basis.

However, they say there is great demand and that they already have a dealer in the UK in Burdens Group. The ‘Dino’ costs around the €115,000 mark.

Swiss company Ecorobotix have taken the same technology and combined it with the advancement of spot spraying.

Whilst they do offer tractor mounted options, their AVO robot is very similar to the ‘Dino’, being controlled from a phone and run off the same GPS and camera technology. 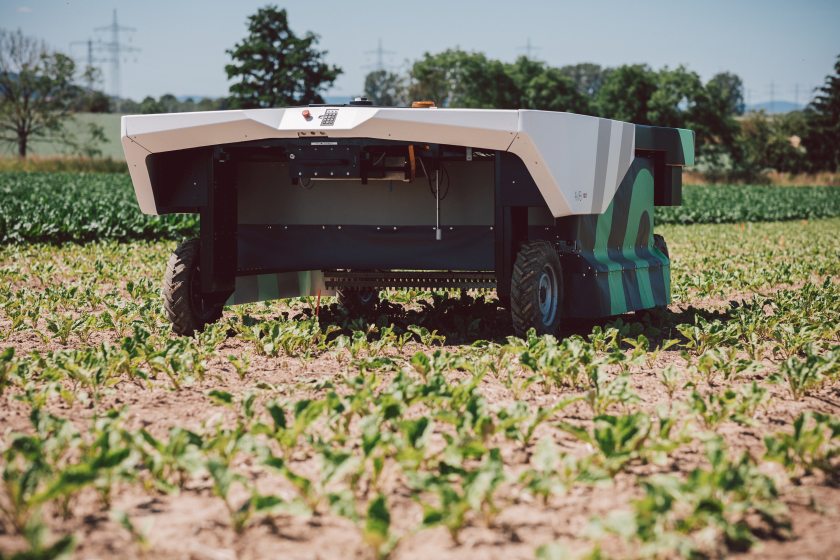 The AVO spot sprays weeds with micro-doses of herbicide

However, the AVO is not just limited to use in rowed crops but can also be used in meadows and broadacre cropping.

The robot uses the same process to identify weeds and spot sprays them with micro-doses of herbicide, apparently using 95% less chemical than traditional spraying.

Like the ‘Dino’ it is fully electric, yet the AVO also has solar sensors to keep it going, whilst it has the potential to cover as much as 10ha a day if it works through the night, with terrain, and solar conditions that suit.

It is also four wheel drive which enables it to operate on slopes and clear rough ground.

The AVO is currently still in development, being used in 10 pilot projects. Ecorobotix say they expect the technology to develop in the future by creating specific treatment and analysis for each plant, and that they hope it will cost around £100,000 on commercial sale.

Whilst weeding robotics have advanced considerably in recent years they still suffer significant challenges: A major drawback is the inability of the robots to be reactive to real life situations.

Whilst farmers can alter their activity to suit the imprecise nature of fields or react to obstacles, it is far more challenging for the machines to make those adjustments.

The key technological advancement for genuine AI to become a reality is for the robots to have the capacity to learn.

As accurate as the current identification technology is, it finds it harder to make the differentiation between the weeds and crops at seedling stage, whilst it works better on a clean green leaf than one that is dirty.

This means a loss is expected for mistakes or imprecise application of mechanical tools.