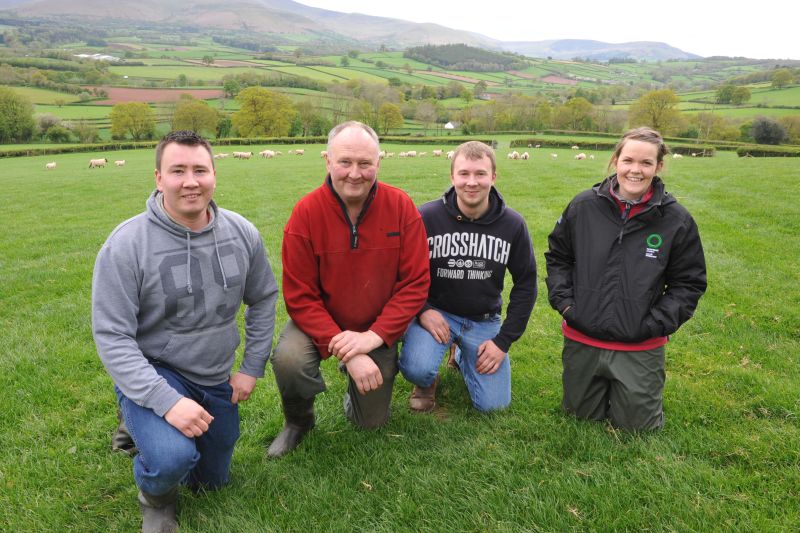 Lewis, Wynne and Dewi Rees with one Red Meat Technical Officer, Elan Davies at the 'Managing the Growing Lamb' event

Selecting sheep breeds that perform better on grass, thereby lowering the cost of production, will underpin future profitability for lamb production, an expert has told farmers.

This must be a top priority for Welsh lamb producers ahead of changes to the direct subsidy system, he said.

He said that when selecting breeds, farmers must understand that there can be more variation within a breed than among breeds.

For that reason, he said farmers must source from a trusted breeder. “That breeder should be taking the same approach as you,” he said.

“At breed sales there is a tendency to buy the biggest ram but his size will mostly be down to feeding not genetics. If you want to finish lambs off grass go for terminal sires with high growth rates, sheep that have been bred naturally on pasture rather than forced with concentrates.”

Growth rate accounts for 45% of lamb profitability in contrast to just 5% for conformation.

“Look at the Estimated Breeding Values (EBVs). If you are keeping replacements look for high eight week weights and often there is a maternal index which is useful,” said Mr Vipond.

He advised again chasing extremes of conformation. “Concentrate on getting your lambs finished quickly.”

The target should be what the market demands – a 19kg R3L carcass.

An obvious cost saving is concentrates – if more use is made of grass, purchased feed inputs can be significantly lowered or removed completely.

Too often concentrates are fed as a prop for 'less than perfect' grazing management, with cereals used to supplement grass with poor digestibility, Mr Vipond suggested.

He advocates rotational grazing based on the growth stage and height of the grass sward.

A simple grazing system can be built by monitoring the number of leaves per grass tiller.

“Grass growth follows the continuous production of leaves emerging from tiller bases, new tillers emerge just above root level in response to hard grazing pressure that allows light to reach the base of the plant.”

The basis of grazing management is to identify when plants have reached the stage where three leaves have emerged – at this point they are ready for grazing.

“If you wait too long until you have got three leaves emerged and one or two are dying off the optimum point for grazing has been missed but if grass is grazed as soon as three leaves have developed, production is maximised,” said Mr Vipond.

Ewe longevity is also key to profitability – if a ewe stays in the flock for an extra year it will reduce the replacement rate, a big proportion of costs.

Mr Vipond urged farmers to plan for the future right now. “You either need to make up your mind to be a proficient farmer and be good at it or make way for someone else.”

For those who choose to stay in the industry his advice is succinct: “Grow a lot of grass, use it efficiently and look for the right breed to convert it into lamb.”

His warning on cost control was echoed by James Ruggeri, Industry Development Executive at Hybu Cig Cymru (HCC). “If you aren’t making money now, don’t expect the prices you receive for your lamb to increase.

“We are at a level where the consumer isn’t willing to pay more for lamb, it is a case of producing it cheaper or they will stop eating it.”

But Mr Ruggeri said there are many farmers who are producing lamb at a profit and that was within everyone’s reach.

“The market returns are similar for all farms, the focus needs to be on costs,” he insisted. “If you want to stay in business that’s what you have to do going forward, lower your costs.”

A host farm for one of the events was Glyndy Isaf, Brecon, where Wynne Rees runs a flock of 1200 Talybont Welsh and crossbred ewes on 650 acres with his sons, Lewis and Dewi.

Their driver for profitability is simple. “You have to get as many lambs alive as possible,” said Mr Rees.

To achieve this care is taken to ensure that the ewes are in good condition and able to produce good quality colostrum and plenty of milk.

The Rees’ also have sales targets. “We get as many lambs sold as we can as early as we can. The crossbreds lamb in mid-February and we get as many gone by the end of June as we can.”