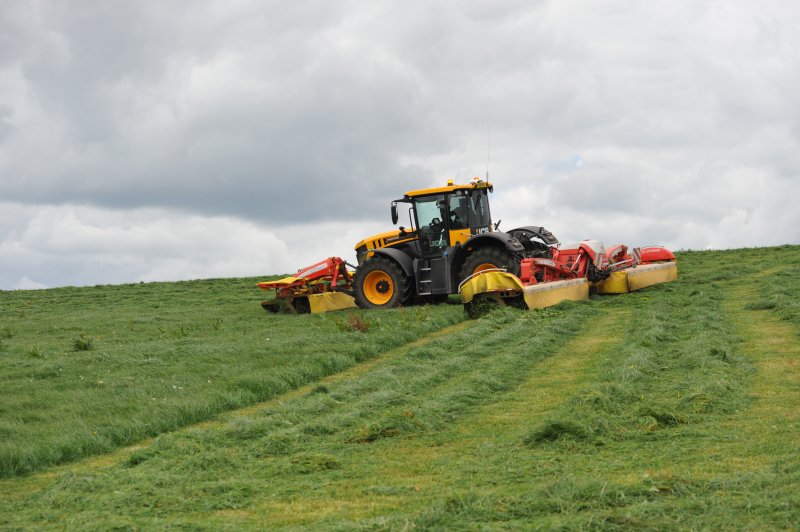 Dairy farmers who improve silage quality by just 1 metabolisable energy (ME) value will produce an additional 60,000 litres of milk from a 1,000 tonne crop.

This is according to silage expert Dr David Davies, who laid bare the financial payback of producing good quality silage at a recent Farming Connect webinar.

Many farmers are not hitting that target, according to 1,000 silage samples analysed by Welsh government's Farming Connect scheme over a five-year period.

Some had an ME as low as 8, but the best performers were at 12, demonstrating what is possible.

The best quality silage will be achieved by cutting early, even if it means a lower yield: “I can’t emphasise enough the importance of cutting herbage young, before the ME or digestibility (D) values start to fall," Dr Davies explained.

And even if the first cut yield is lower, leaving it to ‘bulk up’ reduces the annual yield overall because regrowth from fields with mature crops is slower, and there is the added risk of anaerobic spoilage at feeding out.

A mature crop will have dead material at the base, a lower feed value and higher yeast and mould populations.

At second cut, a high quality can be achieved from a five-week regrowth and, for forage for dry dairy or suckler cows, at 8-9 weeks.

Significant losses in feed value can occur at the wilting stage therefore it is important to optimise wilting.

Dr Davies said the key is to wilt rapidly – he recommends a maximum wilt of 24 hours, or wilting to the target 28-32% dry matter (DM) as quickly as possible.

At the clamping stage, many storage losses can be controlled by even consolidation and by sealing the clamp properly, with enough top weight to ensure air ingress is minimised.

For baled silage, Dr Davies recommended six layers of wrap and stacking at no more than two bales high if dry matter (DM) is low otherwise bales will become misshapen.

Additives are most cost-effective when silage quality and clamp management are good, he added.

“If you do everything right, additives will give you a much better feed value but they shouldn’t be used to cover mistakes."

Once silage is clamped, keep it sealed for a minimum of six weeks to allow it time to stabilise – any earlier and there is a risk of heating at feeding out as the fermentation period will not have been long enough to reduce numbers of yeasts and moulds.

If silage needs to be fed sooner, Dr Davies suggested making some baled silage as a stopgap for those six weeks.

He said it was possible to make good quality silage from an old ley, but only if the dominant species are high nutritive grasses.

If the ley is dominated by weed grasses, the digestibility will never be as good as one of the current ryegrasses on the recommended list.

Dr Davies urged caution if making silage from herbal leys. Although these ensile well, leys have a mix of species and some may dominate in specific areas of a field, leading to variability in silage. This is a particular issue for dairy systems.

“If it is part of a precision milking cow ration, that variability can really upset the ME and DM balance," Dr Davies warned.

However ongoing research will help to answer those unknowns, he added.

For mixed suckler beef and sheep systems, where ewes and growing cattle need high quality silage but dry cows a maximum of 10 ME and 12% crude protein, the tendency to make just one type of silage is costly – either from the loss of bulk by making high quality forage or from the need to feed concentrates when the focus is on producing a lower quality stemmy crop.

Dr Davies advised those systems to focus more attention on the nutritional needs of different classes of stock, and to target cutting dates accordingly.