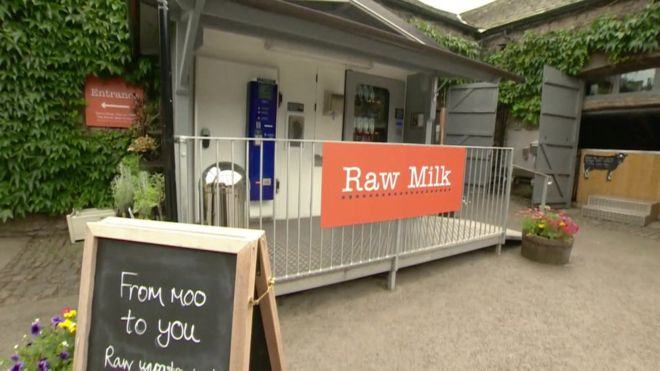 The farm sells about 70 litres of raw milk a day

A farm in Kendal has been banned from selling raw milk, after more than 65 cases of raw milk food poisoning were confirmed.

With their slogan 'From Moo To You', their fresh-from-the-udder milk is sold from special dispensers at their Lake District farm shop.

The cases have been linked to the unpasteurised milk sold in vending machines at Low Sizergh Barn Farm.

Richard Park, the owner, told ITV: "We are working hard to identify the source and are making changes to make sure this doesn't happen again.

"As a farmer this is the very last thing you want to happen when someone buys your produce. I don't want to make people poorly so we are working hard with the FSA.

"We want to sell the milk once more, it has been incredibly popular and customers are asking for it. but until everyone is satisfied the milk is safe it won't be for sale."

A spokesman for the council, which is taking samples on behalf of the Food Standards Agency, said the farm would not be allowed to sell any more raw milk until tests showed no further traces of the bacteria.

In August the farm won a National Trust fine farm produce award for its unpasteurised milk.

A council spokesman said: "We have had 12 cases of campylobacter confirmed so far, with a further 53 probable cases still being investigated.

"None of those confirmed cases required hospital treatment."

Those affected range in age from a one-year-old to 86.