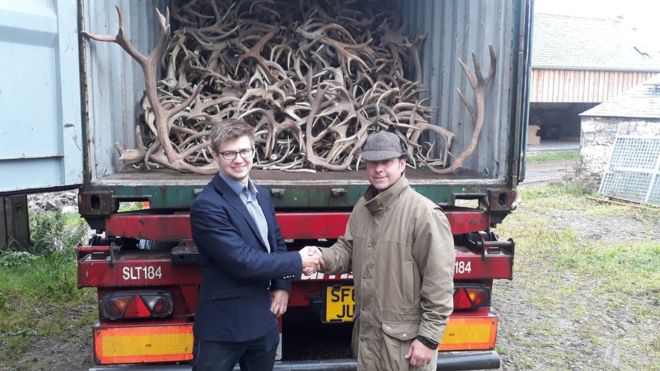 Scottish venison producers are to supply the Chinese medicine market with a shipment of red deer antlers.

An important shipment of Scottish Red Deer antlers has started its 35-day journey from Dumfries and Galloway to the Far East.

Having identified a potential buyer for the antlers through his website, a year-long process saw Mr Shaw go on to secure the necessary export licence for the load and the complete the deal.

Most of the Red Deer antlers in the shipment came from Gledpark’s herd of farmed Red Deer with several other Scottish venison producers contributing antlers to fill the container.

Antlers, exclusively found on stags, are cast annually and can be collected.

Producers of Chinese medicine have valued Scottish Red Deer Antler at up to £16 per kg in Scotland, depending on antler condition, colour, cleanliness and age.

In an important development for the region, future shipments to Hong Kong are already being planned.

Mr Shaw, who is also NFU Scotland’s Regional Chairman in Dumfries and Galloway, said: “Although it is early days, the potential demand for Scottish deer antlers in Chinese medicinal products could represent a very valuable market for those who are already producing venison, or are planning to keep deer in the future.

“At current prices of up to £16 per kg of antler, and many adult stags casting a set of antlers that could weigh more than 15 kgs, there is a valuable return to be gained if we can secure a foothold in this market.”