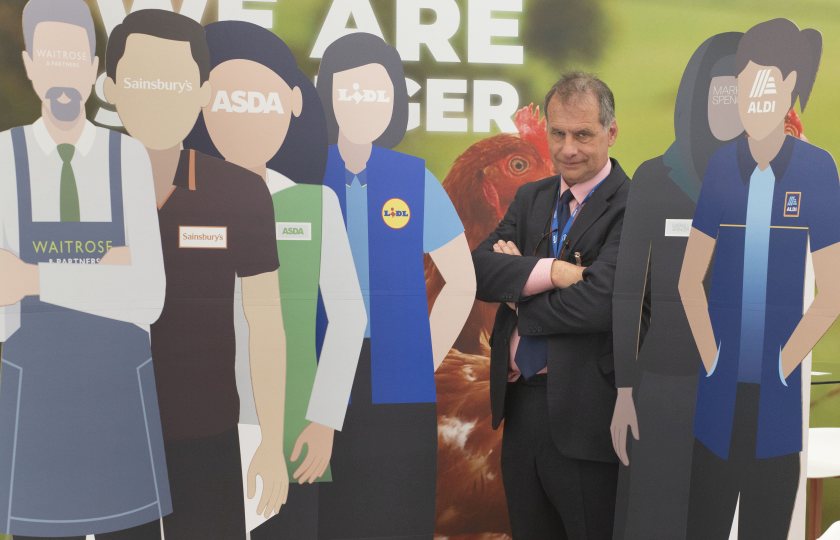 Leaders of the country’s free range egg farmers handed out the empty chair treatment to Britain’s supermarkets at the Pig and Poultry Fair in frustration at what they say are mounting losses.

The British Free Range Egg Producers’ Association (BFREPA) had invited the big retailers to the show to discuss a crisis in the industry caused by spiralling costs.

When the supermarkets didn’t show up, BFREPA rolled out a series of cardboard cut-outs on stage in place of the retailers’ absent representatives.

One free range producer spoke of the “systematic destruction” of family farms, others said they had decided not to re-stock their sheds because of the financial crisis.

Another farmers called for the organised depopulation of flocks to force the UK's biggest retailers to respond.

BFREPA says that producers have been hit by huge hikes in production costs in recent months, pushed even higher by the war in Ukraine.

ADAS analyst Jon Walton told those attending the event that feed prices had increased by 40 percent over the last year.

The price of pullets was up by 15 percent over the same period. Since September, the cost of producing eggs had increased by 30 pence per dozen.

Yet over the last 12 months the average price paid to producers has increased by just three pence per dozen.

Mr Walton said that egg producers were losing 23.8 pence per dozen on average. Those with finance were losing even more - as much as 41.2 pence pro dozen.

BFREPA chief executive, Robert Gooch said the body had written to the supermarkets to say that producers needed an extra 40 pence per dozen on the egg price to cover rising costs.

In April, BFREPA wrote to the retailers to invite them to discuss the issue at the Pig and Poultry Fair. None attended, although Tesco and Morrison responded to say that their feed tracker contracts helped to offset rising costs.

Mr Gooch said that producers were now at breaking point: “The current situation is ruinous. We have written to all the major retailers asking for their help but to date we have been largely ignored.

“We are not crying wolf. This isn’t something retailers can ignore in the hope it will go away. If the UK’s biggest supermarkets don’t increase the price of free range and organic eggs to a level where farms can at least break even, there will be egg shortages by the end of this year.

“Farmers cannot continue to produce eggs for nothing,” he said. “The situation is so dire that scores of farms are considering stopping production at the end of their current flock

“Only retailers have the power to prevent a mass exodus and keep British free range eggs stocked on supermarket shelves for their customers.”

East Anglian free range producer Daniel Brown told those attending the fair that all his costs had been increasing.

His electricity bill had just tripled, labour costs had increased, so had turnaround costs. “It’s like the systematic destruction of family farms by the supply chain.

"We have got lots of fairly small farms that have built chicken sheds at vast costs, having been told by the packers that they were needed, assured that these eggs are needed, Tesco needs them, everyone needs them.

"And then when the crunch comes, when the Ukrainian war happens, they are just not there. They just abandon you to it and let you take the hit."

Mark Williams, chief executive of the British Egg Industry Council (BEIC), said that the egg industry had been facing a “perfect storm.”

“Even buying pullets. Pullets have to be fed so pullet prices have increased as well. Egg producers are getting it from all sides at this moment in time.

“Our colleagues in Europe are equally on their uppers as well at the moment. There is just not the egg out there. Things have to change.”

Mr Gooch said production had already been increasing before the Ukrainian war broke out but Elwyn Griffiths of Oaklands Farm Eggs said the Russian invasion had brought further increases.

“It has led to costs at farm level. Every single day we get a new letter coming through, this cost’s gone up, that cost’s gone up.”

He warned: “The egg situation is really up there. Chick placings are there for us all to see. There are less chicks going down, and a chick is not for this Christmas it’s for next Christmas.

"We are at the point of no return. We have got rearing sheds empty, we have got farms empty. Other big packers have taken millions of birds out of the market.”