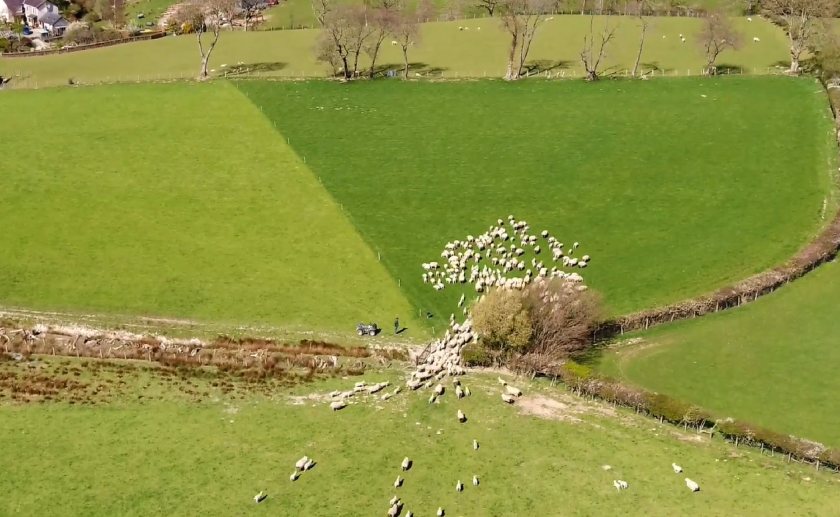 The Evans, who farm near Aberystwyth, have been experimenting with rotational grazing
Sign in to add your own press release SIGN IN Register

Tom and Beth Evans' farm Pendre, near Aberystwyth, is aiming to increase its SOM, not only for the grass performance benefits but also to sequester carbon.

Increasing levels by just 0.3% would put the farm in a carbon negative position, where it absorbs more carbon than it emits.

At a 0.3% increase in SOM, the carbon emission balance would be -85.65 tonnes CO2e, this means that the farm would sequester significantly more carbon than it releases every year.

The Evans had been experimenting with rotational grazing, and baseline analyses taken at the start of the project showed this was already having an impact on SOM.

“Rotational grazing can contribute to soil health and soil organic matter and not only does that bring with it the advantages of reducing input costs and increasing productivity but there are environmental advantages from improving soil health," he said.

Rotational grazing encourages the growth of plant material which is recycled into the soil and allows a rest period, enabling the plant to increase its root depth.

Stocking high numbers of animals in small paddocks also causes plant material to be trampled into the soil while that high stocking intensity allows livestock manure to be spread evenly.

For the Evans, the financial advantages of rotational grazing their 500-ewe flock is significant – they have halved their concentrate use because since splitting fields into paddocks and moving sheep around, they are growing a third more grass in a year.

Mr Evans had the confidence to put the system in place after attending the Farming Connect Prosper from Pasture programme.

“I am a strong believer in benchmarking and being able to compare our growth with others is beneficial. My aim is to increase our growth rate to match others."

Pendre is highly stocked in the spring and early summer post-lambing, so the Evans are aiming to improve sward quality and early season production.

To achieve that through reseeding is difficult because taking land out of production puts pressure on grazing.

Overseeding offers a potential short-term solution but there are challenges associated with this, as a project at Pendre has demonstrated.

Two different seed mixes were drilled on 11 September in two fields that were low in clover and ryegrass.

Soil and grassland management specialist Chris Duller, who advised on the project, said ideally it should have been four weeks earlier but demand for grazing ruled that out.

One mix was sown with a vigorous mix of hybrid ryegrass and festulolium to boost early season grass growth and the other with clover and perennial ryegrass – one half of that was sown with seed treated with a lime coating and fertiliser.

A section of this included plantain to see if this could be successfully oversown.

A wet autumn followed but it was managed well through the wet conditions by grazing to allow the seeds to tiller out but not at a level to graze out the seedlings.

In spring 2021, the ryegrass level in the ley oversown with hybrid ryegrass and festulolium had been boosted to 60% compared to 20-30% prior to overseeding and festulolium was evident in the sward.

However, there was no evidence of surviving clover or plantain in the sward of the other ley.

There was no evidence that the treatment on the seed improved establishment or survival.

Mr Duller admitted that overseeding can be 'hit and miss' but added: “These are leys that will probably be reseeded in two or three years’ time, oversowing provided an opportunity to perk them up."

July or August are the ideal months for oversowing, he advised – any earlier and the germinating seeds would need to compete with established swards at peak growth rates.

Keep grazing pressure tight beforehand, he recommended, and never be too ambitious with acreage: “Always do a few acres at a time just in case it struggles; don’t go out initially and oversow 40 acres."

The seeds most suited to overseeding are the biggest – hybrids and tetraploids. These are not the best grazing varieties, Mr Duller added, but pointed out: “Overseeding is a means of topping up the sward and producing the best quality grass in a short period of time.

“It is a struggle to get diploid varieties with smaller seed to germinate quickly and compete - and the results are not so effective."