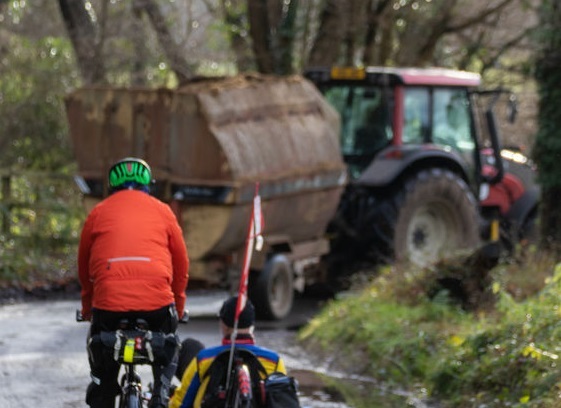 Cyclists are being asked to take rural road safety seriously amid increased pressure on drivers of farm vehicles to be more aware of these road users.

As cyclists continue to be killed while riding – especially when on rural roads – Farm Safety Week wants to raise awareness around the issue.

With increased cycle traffic on rural roads comes increased pressure on farmers and farm workers to become more aware of them.

In 2018, 99 cyclists were killed on UK roads - 48 of these on rural roads. That year, NFU Mutual’s claims involving agricultural vehicles and pedal bikes totalled over £22m.

According to a recent poll of 5,697 British Cycling members, 60% of respondents felt that poorly maintained roads were one of their biggest safety challenges.

Farmers can pass road cyclists safely in some circumstances. Rule 163 of the Highway Code states that, when passing cyclists, all drivers should give ‘as much room as you would when overtaking a car’ – typically 1.5 metres.

What about cyclists riding side by side? The Farm Safety Foundation, which organises Farm Safety Week, said: "Road cyclists don’t ride two abreast just to chat or to purposely hold you up.

"This may come as a shock to many who think that riding side by side is dangerous, illegal, or just downright rude and inconvenient.

"The first thing to say is that riding side by side is perfectly legal, with Rule 66 of the Highway Code only stipulating that cyclists should ride in single file “on narrow or busy roads and when riding round bends."

The charity added: "If you think of a group of cyclists as a single vehicle, by riding two abreast they make that vehicle shorter and therefore quicker to overtake safely."

What measures should farmers and cyclists be following?

To bring more awareness of the safety measures farmers – and the public – should be following, Farm Safety Week have come up with the following rules to ride by:

• Stay alert – Recognise that you're in an environment where you might encounter groups of road cyclists enjoying a Tuesday evening ride.

• Slow down – Farm vehicles often travel at slow speeds anyway but resist the temptation to assume that you are the only vehicle on the road.

• Pull over carefully – Wait for a safe passing zone, watch for oncoming traffic, signal and return to the lane once all the cyclists are in your rear-view mirror.

• Signal – Road cyclists have their own hand signals but they also need to know where you are going, especially if you are making a wide left-hand turn.

• Know the basics – Following the speed limit and wearing your seat belt is just as important in the country as it is on city streets.

• Take a second look – Before you pull into any intersection, turn into a field or driveway or make a move to pass, be 100% sure your path is clear in all directions.