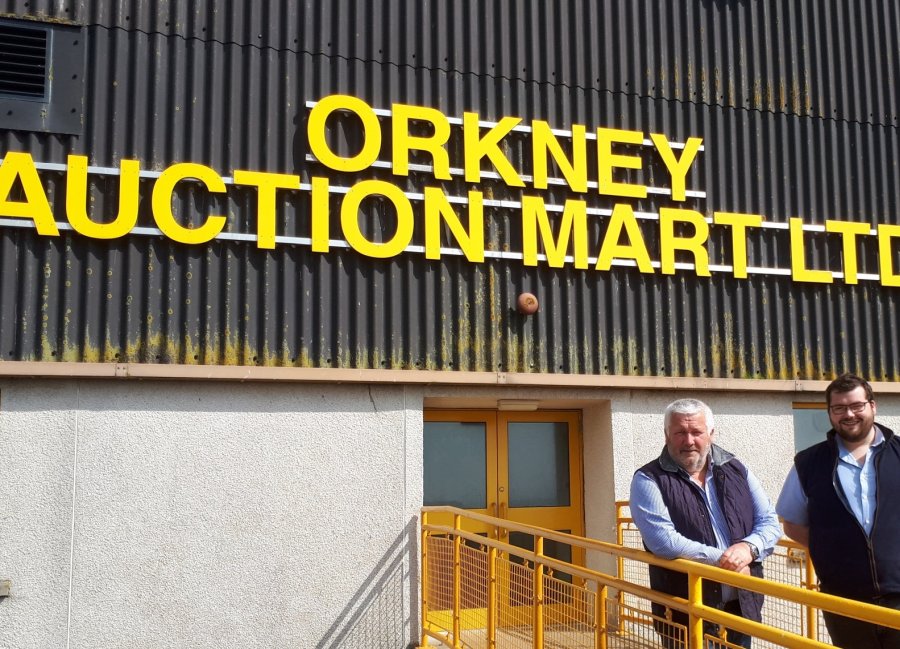 Jim Linklater and Graham Low, both auctioneers at Orkney Mart, say keeping the connection has been key to continued cattle trade on Orkney

Keeping in touch with buyers and farmers has been 'key' to continued cattle trade on Orkney, according to the island's only livestock mart.

Sales have been 'working well' on the Scottish island during the coronavirus lockdown period, despite systems at Orkney Mart having to change and adapt.

Graham Low, senior auctioneer at the market, explained that being on an island had been a 'challenge', but also a 'bonus'.

"We rely heavily on our mainland buyers to come over for the sales and that was wiped out overnight at the end of March.

"On the upside, Orkney beef has a quality that buyers will hold out for,” he said, adding that keeping connected had been 'key' for the market.

Once the mart knew the mainland customers would not be stepping foot on the island for some time, Mr Low, along with fellow auctioneer Jim Linklater, called regular buyers and sellers to arrange sales.

“Longstanding relationships meant they trusted us to select cattle for them, which could be transported as usual on the freight ferry on a Monday night, causing no interruption to their usual mode of business and they were thrilled with the quality of the stock.

"We sold 400 head, similar to what we’d anticipated at the special store sale due at the end of March,” Mr Low said.

Pre-lockdown the mart had just moved to fortnightly sale dates, which proved essential to keeping the mart operating for island customers under guidelines, with a skeleton staff and fewer cattle to process.

Livestock agents and local farmers have been taking orders from buyers and putting in bids.

In May, the mart moved to weekly sales. Mr Low said this had eased the process further for all and suited the buyers to have the stock spread out over the month.

“The support of local customers for our mart is never underestimated and has been particularly appreciated during this time," he added.

"Local farmers and butchers were initially concerned about the loss of food service and the Orkney schools closing but the fat trade has held up really well with the butchers busy, a mix of more local buying and BBQ weather both of which I hope is sustained.”

Keeping in touch with both the buyers and farmers on the island had been valuable for the whole community, not just to keep trade going, but also social interaction in the absence of the mart gatherings, said Mr Low.

The strictest lockdown hit lambing and calving time when farmers enjoy the social aspect and outlet of the mart, he noted.

Constant phone contact has revitalised the mart’s role of offering a listening ear and “general banter” away from the day job.

The Orkney Mart website has been updated regularly to keep the flow of information as the situation has evolved and the team has been sharing stock and stories on Facebook.

Planning is on track for the autumn sales being back to normal, launching in August with the big Show Sale, which in a usual year would mark the end of the Orkney shows.

Flights are booked for buyers from the mainland and pre-registered buyers and vendors should all be back on ringside, Mr Low explained.

“We are really looking forward to seeing friends and colleagues back at the mart.”