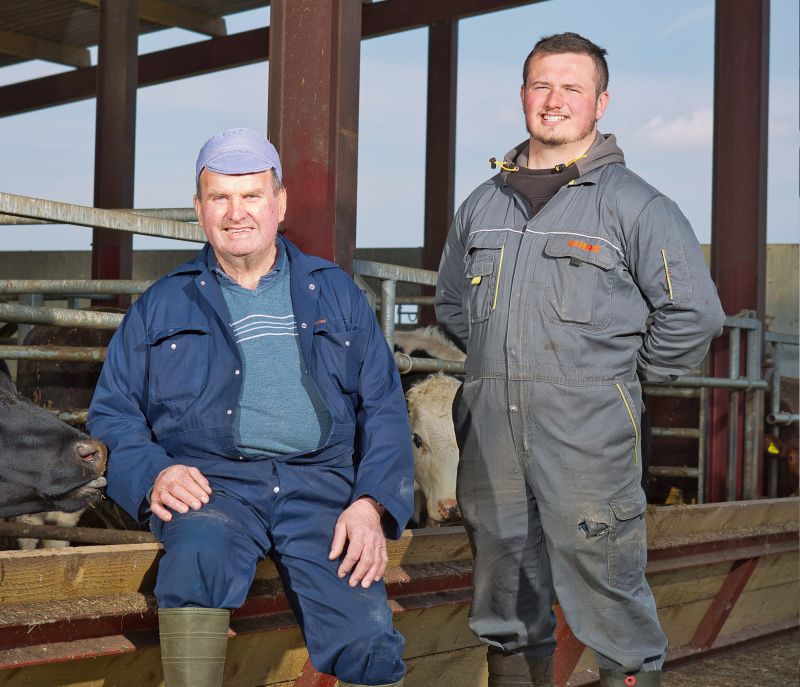 John Vaughan with his grandson and business partner Llyr Evans

A young farmer has been given the chance of a lifetime by his grandparents after the help of a programme which supports those wanting to get a foothold on the farming ladder.

It's been two years since Llyr Evans, 21, was given a boost by his grandparents John and Dailwen Vaughan who farm on a beef and sheep holding near Boncath in Pembrokeshire.

The Vaughans entered into a partnership agreement with Llyr, giving him a 51% share in the livestock.

It means that at just 21-years-old, Llyr is already building up his own capital investment while also learning how to manage a successful farm business alongside his experienced grandfather.

The Venture programme, spearheaded by Welsh government's Farming Connect, provided support for the Vaughans, who wanted to step back from farming while their grandson got that important first foothold.

For John and Dailwen, who are both of retirement age, the couple had the confidence to formally bring Llyr into the stocking side of the business.

The new partnership arrangement has the backing of the whole family and has provided a much-needed solution to safeguarding the future of the farm, where John and Dailwen still live.

Working in partnership to develop the farm

From an early age, Llyr has spent every spare minute at Glasdir farm, which is just a few miles from his parents’ house in nearby Hermon.

After leaving school he enrolled at Gelli Aur College where he obtained his Level 3 Extended Diploma. He also purchased his own flock of 100 sheep which he kept on land rented locally and purchased a small number of suckler cows. All stock are now incorporated into the Glasdir business.

Just two years on, Llyr and his grandfather are working in partnership to develop Glasdir, which extends to 118 acres of owned land with a further 42 acres rented on a short-term basis.

The current farming system is based on 120 beef cattle finished under 30 months and 100 lowland ewes which lamb from mid-February onwards.

It’s already a profitable system, but with Llyr’s energy and focus, both he and his grandfather are now intent on developing the business further.

If all goes to plan, Llyr will eventually be sole owner of all the livestock and part-owner of the machinery.

For John and Dailwen, the arrangement has brought them peace of mind and the opportunity to scale back John’s day to day involvement with the heavier work.

“Llyr is not only our grandson, he’s a very ambitious young farmer. He’s focused on ensuring the business performs at its best and thanks to benchmarking with other similar businesses, he knows what he’s aiming for and is intent on developing the business further,” says John.

John says that if at some stage in the future the farm should be sold. He hopes that Llyr will by then have built up his own capital investment of stock and machinery and be in a good position to consider buying Glasdir or a different farm.

For Llyr, the future looks bright and thanks to his supportive and far-sighted family he’s been able to gain that all-important foothold into building up his own business.

He said: “I am very grateful for the opportunity which the whole family sees as really beneficial and positive, because it’s a way of keeping the business going and safeguarding its future long-term while at the same time giving me a fantastic opportunity to start building up my own business on a self-employed basis.”

The Venture programme gives farmers guidance and support to formalise a partnership agreement. Fully funded business advice and a legal framework are provided as part of the programme.